Is the United States really that GREAT?

The US was traditionally regarded as the world’s richest nation, the leading economy, the home of leading businesses. But is it really so nowadays? These charts seem to suggest otherwise and really leave us wondering. In many essential ways, the US fares much worse than all other developed countries.

The first thing that strikes you is the social inequality in the US. For a country so rich, it seems bizarre and unexplainable that so many people are poor. The poverty line is defined as the bare minimum with which one can survive, and apparently, the income of 1 in 6 Americans falls below that line. The rich are definitely rich, but the poor are really poor.

It might seem that it’s not a big difference to other developed countries such as Spain and Greece, but at the point of this statistic, the two countries had an unemployment rate over 20%. The US managed to top them with a much lower unemployment rate which means that even if you are working, there’s a chance you’re below the poverty line.

Actually, the US is the developed country with the highest income inequality, faring closer to China or African countries than countries like Norway or Germany.

This is where things start to really get rough.

This time, the difference is much more striking. With only 2.9 beds per 1,000 people, the US falls way below other developed countries. France and Germany more than double that figure, whereas developed Asian countries are in a completely different league.
To confirm that this is not some anomaly, a similar trend exists for physicians per 1,000 people. Not only does the US not have enough hospital beds, it also doesn’t have enough doctors.

Ironically, this happens despite the US spending much more money per capita in terms of health. So not only is the US providing insuficient health coverage, but it’s doing this for more money.

Again, there’s a big disparity between the US and other developed countries. What this tells us is that although the country spends enormously on healthcare, this expenditure is extremely inefficient. Also, consider that many Americans aren’t even insured — something which doesn’t happen in the other developed countries on this list, where everyone is insured by default.

Together, this indicates that the US spends a lot of money, insures few people, and is an overall extremely inefficient system. Many argue that not insuring your citizens loses more money than it saves in the long run. This isn’t something related to recent events, this is a trend that has been evident for a few decades already.

Americans also aren’t healthy. In a ranking of the world’s healthiest countries, the US was again mediocre, coming at #34th, behind Cuba, Lebanon, and Costa Rica; just above Croatia, Qatar, and Brunei.

Much of this can be attributed to an unhealthy diet. More than 1 in 3 Americans are obese, more than any other developed country in the world. More youth are obese than anywhere else in the world too, indicating that the country’s position as a “leader” in obesity will carry on in the future.

The land of all possibilities? Maybe… but especially if you’re a man. Few places in the world if any ensure true gender equality but the US seems to be especially bad. It’s notoriously difficult to advance through a company if you’re a woman. Just have a look at the percentage of women on the boards of public companies. Just 1 in 6 board members are women.

But that doesn’t even begin to say just how hard it is to be a woman in the US. There are just two countries in the world that don’t provide a paid maternity leave: Lesotho and (you’ve guessed it) the US. 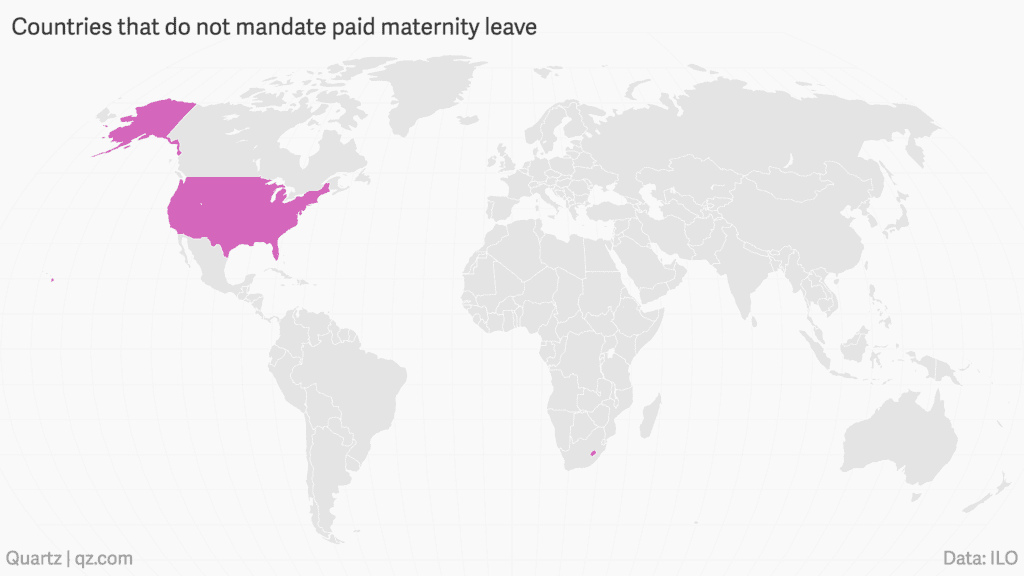 Although the difference isn’t quite as striking, women in the US are also more likely to be a victim of violence than anywhere else in the developed world.

Education is another problematic aspect. In terms of literacy, the US fares just above average compared to other OECD countries, whereas in Advanced literacy, it fares below average.

The fact that teachers in the US are drastically underpaid doesn’t really do much to help the problem.

This is another aspect where the US fares dismally. This chart only begins to reveal the problem.

No other developed country comes even close to the US when it comes to gun-related violence. Sure, you can pick countries like Swaziland or Brazil and make the US look good by comparison, but if you look at the developed world, it’s not a pleasant sight. The chart above makes a lot of sense when you understand that most assaults are carried out with a gun, and all other countries on the list have much stricter gun laws. 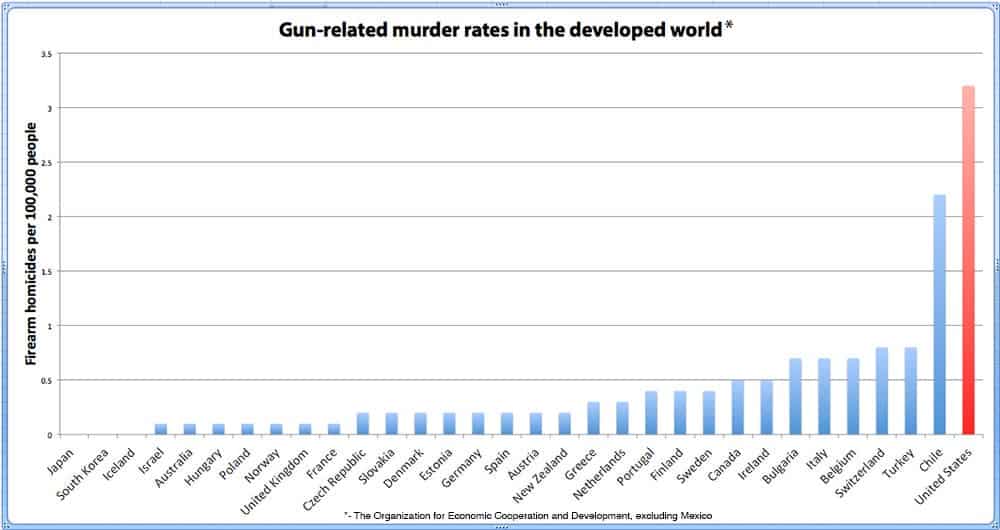 You might think that this is somehow due to the large number of assaults, but that’s not really the case; this happens, to a large extent, due to incarceration for minor crimes, especially drug related issues, and due to the fact that much of the prison system in the US is private. This gives prisons an incentive to keep people in prison (because they make money) instead of rehabilitating them.

Car accidents are also a reason for concern, though in this case, South Korea takes the cherry. For the US — this represents another dent in personal safety.

President Trump boasted that the US is a leader in renewable energy, but the figures seem to say otherwise. The US simply fares worse than other countries. Unlike the rest of the world, the US also largely overlooks wind energy, which President Trump considers to be ‘ugly.’

It’s also interesting to note that these areas, in which the performance of the US is mediocre at best, are largely the areas from which Trump is withdrawing funding — to invest more in the military spending.

To sum it up, we’re not saying that the US isn’t a developed country — quite the opposite. We’re signaling that despite it being a developed country and especially, despite having enormous wealth and economic potential, the country has a dismal performance in many crucial aspects. When your education, your health, and your social and physical security is mediocre, then what’s the point of being a rich country?