by Mihai Andrei
in Other, Science

In a slapp across Beijing’s face, the Nobel Peace Prize has been awarded to imprisoned Chinese scholar Liu Xiaobo, for “his long and nonviolent struggle for fundamental human rights in China”. The decision of the Nobel jury goes totally against the Chinese government, who claims Liu Xiaobo is nothing more than a criminal. The Nobel Committee chairman, Thorbjoern Jagland spoke his mind about this decision.

“China has become a big power in economic terms as well as political terms, and it is normal that big powers should be under criticism”

What’s even more interesting is that during the time he made this statement the broadcast on the BBC and CNN went black; also, there have been reports that text messages containing “Liu Xiaobo” were blocked and not being sent, which is probably the work of the Chinese government – who has also taken an angry official stance, as you could easily guess: 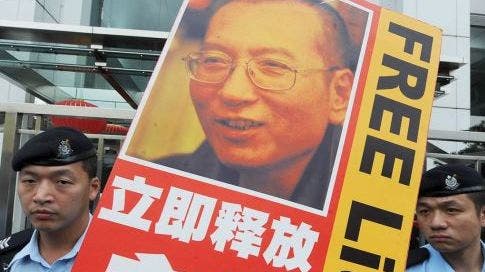 They also said this will probably damage the relationship between China and Norway. As for his wife, who is supposed to be free, her house was surrounded by police cars and she wasn’t allowed to meet reporters, giving statements via text messages. She added that she will give the good news to her husband on Saturday, because theoretically he doesn’t have any way of finding out (but I seriously doubt he hasn’t already).

“I am grateful to the Nobel Committee for selecting my husband, Liu Xiaobo, to be the recipient of the 2010 Nobel Peace Prize. It is a true honor for him and one for which I know he would say he is not worthy … I hope that the international community will take this opportunity to call on the Chinese government to press for my husband’s release.”

A literary critic, Liu Xiaobo was imprisoned several times for protesting against the Beijing regime. Last year he was convicted just on Christmas day, when pretty much every foreign reporter was away, to 11 years in prison for “inciting subversion of state power”. The evidence against him was a series of essays he wrote; he is currently held in a prison cell with five ordinary criminals.

In January, a group including Vaclav Havel and Peace Prize laureates Desmond Tutu and the Dalai Lama co-signed an article saying Liu deserved the price without a doubt, for “his bravery and clarity of thought about China’s future”. While it is not uncommon for the Nobel Peace Prize to be awarded to someone who has been previously incarcerated (take Nelson Mandela for the most famous example), it is indeed very rare for it to be given to someone currently in jail. Only German pacifist Carl von Ossietzky and Burma’s Aung San Suu Kyi can claim this distinction.

What’s ironic is that this is the first time a Chinese who hasn’t left the country gets the awards; physicists Frank Yang and Lee Tsung-Dao and novelist Gao Xingjian won the prize for work they did outside China. The bad news is that this will probably infuriate Beijing even more and we may very well see more human rights or pro democracy activists being arrested. Imagine that; human rights, democracy… who knows what they’ll think of next ?