Sucking on your baby’s pacifier may protect them from allergies

Many parents do this without much thought -- but they may be on to something.

Many parents clean their baby’s pacifier by sucking on the silicone nipple. As it turns out, this may actually be a very helpful practice that boosts the child’s immune system and offers protection against allergies.

Researchers at Henry Ford Health System tracked levels of a protein linked to allergies, the IgE antibody, in 74 infants whose mothers reported giving them pacifiers to use. Fathers were not included in this study.

Some mothers said they sterilized the pacifiers in boiling water or cleaned them with soap and water, while others said they simply sucked on them. Researchers compared the babies’ IgE levels at birth, six months, and 18 months for each cleaning method.

The babies whose parents sucked on their pacifier to clean it had lower levels of this antibody, which theoretically makes them less susceptible to allergies and asthma. It’s possible that the protective effects may be due to parents passing on healthy oral bacteria in their saliva, which could strengthen the child’s immune system. The conclusion seems to be supported by a previous study published in 2013 by Swedish researchers, who likewise found an association between parents sucking on their baby’s pacifiers and a reduced risk of allergy development.

“Although we can’t say there’s a cause and effect relationship, we can say the microbes a child is exposed to early on in life will affect their immune system development,” said Eliane Abou-Jaoude, the study’s lead author.

“From our data, we can tell that the children whose pacifiers were cleaned by their parents sucking on the pacifier, those children had lower IgE levels around 10 months of age through 18 months of age.”

[panel style=”panel-warning” title=”Allergies” footer=””]An allergy is the response of the body’s immune system to normally harmless substances, such as pollen, foods, or house dust mite. This hypersensitivity causes the body to overreact by producing a disproportionate immune response when contacting an allergen. In some cases, the response can be so strong that the body enters anaphylactic shock — with potentially fatal consequences.

It’s not clear what causes allergies or why some people are more predisposed than others. Studies so far have linked both genetic and environmental factors to allergies. What’s certain, it seems, is that allergies are on the rise regardless of gender or ethnic background. According to findings presented at the American College of Allergy, Asthma, and Immunology conference, the incidence of shellfish allergy has grown by 7 percent, tree nuts by 18 percent, and peanuts by 21 percent. Shellfish and peanuts are also among the most common food allergies overall. The results are based on a survey of 53,575 U.S. adults.[/panel] 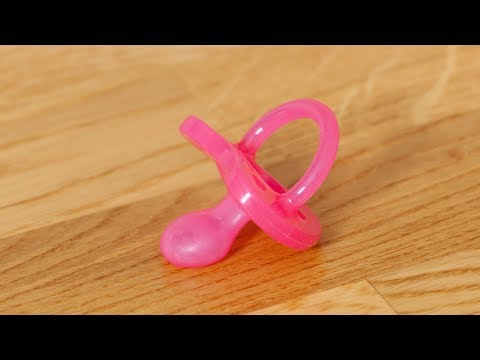 Because the study did not establish a causal relationship, but merely a correlation, parents should take these findings with a grain of salt. That being said, sucking your baby’s pacifier to clean it might not necessarily lower the child’s risk of developing allergies. It could be that other factors are at work. For instance, the same parents might let their children play outside in the dirt more or may live in less sanitized households. Previously, research showed that people who live near livestock, those who avoid dishwashers, and even babies born through the microbe-filled vaginal canal (and not a C-section) are less likely to develop allergies. Children who grow up with pets also tend to have a lower allergy risk.

More research will have to be carried out in order to tease out the correlation between pacifiers and baby’s risk of developing allergies.