Meet Chuño, a space worthy food that the Incas made eight centuries ago

It's got an impressive shelf-life for something you prepare by leaving outside for a few nights then stomping on it.

by Alexandru Micu
in Agriculture, Feature Post, Home science, Nutrition
A A

The Inca empire once spanned the length of the Andes, and was the largest single country in pre-Columbian America. This is even more impressive when you consider just how incredibly harsh the Andes can be — freezing by night, rugged, dry, and windy all the time. In a time where any type of information or goods had to be transported by human or animal effort, maintaining an empire seems almost impossible.

But the Inca did it. The unique requirements of the Andes led them to develop staple food that rivals modern astronauts’ food in shelf-life, nourishment, and ease of transport to power their way to an empire. That food is called Chuño, and is still being made the same way it has been eight centuries ago — by leaving potatoes out for a few nights.

Do you want some fries with that?

Chuño is basically freeze-dried potatoes, which is remarkable as they were developed by a culture that had almost zero food-processing technology. What they did have though was a harsh, unforgiving climate, which they put to good use. Altiplano villagers, living in the high plateaus of Bolivia and Peru, make chuño by using the warm days and freezing nights of June to repeatedly freeze and thaw the potatoes, then crushing them underfoot to remove the tubers’ skin and push out the liquids.

For such a simple production process, the result is incredible — Chuño is really filling and it can be stored and eaten for a decade after being prepared with the simplest of storing methods. There’s actually two varieties of the food — black chuño is made with bitter potatoes left to freeze overnight then crushed to remove the liquids inside, until it’s completely dehydrated. White chuño is made by soaking potatoes in the cold rivers and streams of the area, then sun-drying them. 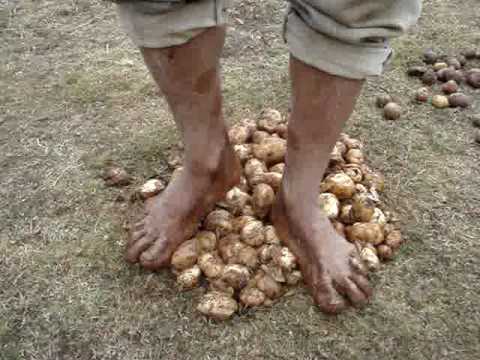 “It was the food that sustained Inca armies,” said Charles C. Mann, an author who has written extensively on the Americas before the European conquest.

The food is little-known outside of the Andes, and newcomers to the region take a little bit of getting used to it. Some have said that it tastes nothing like a potato should, but comes really close to the taste of chalk. Or Styrofoam. Its smell has also been compared to dirty socks. Yum!

So it’s a bit of an acquired taste. Locals still love chuño, though. All you need to do before eating chuño is to rehydrate the potato, but locals cook them into several tasty dishes, usually serving it with an Andean chili called ají. Or they grind them into a flour which they use to thicken soups and stews.

But the most useful thing about chuño is its long shelf life. When the going gets tough and there’s no money for canned foods, or no llamas for meat, and there’s a bad harvest, chuño comes in and saves the day.

“This ability to store food is important in a region where periodic droughts can destroy a year’s crop,” said Clare A. Sammells, an anthropologist who wrote an ode to the often-shunned freeze-dried staple. “Chuño provides the food needed to survive.”

For me, chuño is incredible because it shows just how resourceful humans can be. The Andean people took a look around and said “Ok, what do we have? Deadly cold nights, loads of dust and these here tubers.” Then they used them to make food worthy of space flight. Sock-smelling pieces of chalk-like space food, but no less impressive.