Neanderthal genes may be making some people's skulls more elongated -- they may also explain some modern human brain evolution.

by Tibi Puiu
in Health & Medicine, News
Reading Time: 3 mins read
A A

Compared to our early ancestors, we humans have unusually round, or ‘globular’, skulls. Neanderthals, with whom humans interbred, have elongated skulls, which are typical of all other primates besides Homo sapiens. Remarkably, it may be the two genes inherited from Neanderthals that may explain our weirdly round skulls, say researchers in a new study published this week.

How Neanderthals may offer clues about human brain evolution

About 2% of the DNA of people living outside Sub-Saharan Africa is Neanderthal. This DNA that we’ve inherited from multiple interbreeding events among dispersed populations can affect skin tone and hair color, height, sleeping patterns, mood, and even smoking status. Neanderthal and Denisovan genes are also responsible for a slew of diseases that plague mankind, such as type 2 diabetes, Crohn’s disease, lupus, allergies, and more. But we’re only beginning to scratch the surface of our Neanderthalian legacy.

An international team of researchers led by Philipp Gunz, a paleoanthropologist at the Max Planck Institute for Evolutionary Anthropology in Leipzig, Germany, investigated what may have shaped the skulls of modern humans. Globularity (round skull shape) is thought to reflect evolutionary changes in the relative sizes of structures of the human brain. But since brain tissue doesn’t fossilize, it can be challenging to identify an underlying biological mechanism.

The researchers turned to a novel strategy in order to answer this question. Their approach involved analyzing fossil skulls, ancient genomes, but also brain images — quite the interdisciplinary effort. 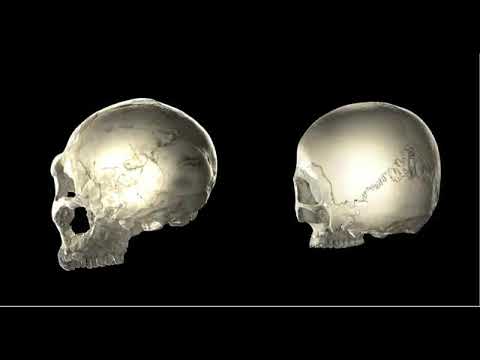 While all present-day humans exhibit globularity, there is significant variability in skull shape among populations — in other words, some skulls are ’rounder’ than others. By comparing computed tomographic scans of Neanderthal skulls and those of modern humans, the researchers developed a single measure of globularity. Later, thousands of brain scans were analyzed, along with the genomes belonging to 4,500 participants, so that researchers might associate skull shape to certain genes.

The analysis revealed that Neanderthal DNA fragments on chromosomes 1 and 18 were associated with more elongated brains. The same fragments are believed to alter activity in two genes: UBR4 and PHLPP1, both playing important roles in brain development. Specifically, these genes affect the formation of new nerve cells and their insulation in the basal ganglia (also known as putamen) and the cerebellum.

“We know from other studies that completely disrupting UBR4 or PHLPP1 can have major consequences for brain development,” said senior author Simon Fisher, a geneticist at the Max Planck Institute for Psycholinguistics. “Here we found that, in carriers of the relevant Neandertal fragment, UBR4 is slightly down-regulated in the putamen. For carriers of the Neandertal PHLPP1 fragment, gene expression is slightly higher in the cerebellum, which would be predicted to have a dampening effect on cerebellar myelination.”

The effects of these Neanderthal DNA fragments are subtle but by analyzing a large enough sample size, the researchers were able to tease them out. Yet, that doesn’t mean that globularity is explained by Neanderthal interbreeding. Like many other traits, globularity is likely the result of a combination of different genetic variants.

Gunz is careful to note that having an elongated skull does not necessarily mean that such individuals have more Neanderthal DNA, nor do the findings suggest that behavior can be explained by skull shape.

“The focus of our study is on understanding the unusual brain shape of modern humans. These results cannot be used to make inferences about what Neandertals could or could not do,” he said in a statement.

In the future, the researchers plan to re-do the analysis on tens of thousands of people in order to find more genes associated with cranial roundness and other biological characteristics.

“The interdisciplinary approach that we developed for this study could be applied more broadly to unresolved questions about human brain evolution,” says Fisher.