Be sarcastic! It’s good for you, scientists find

Using and understanding the intricacies of sarcasm is a fine art; one does not simply “become” sarcastic – you must dive into it, let it embrace you. You must become sarcasm. But jokes aside, sarcasm is a strange thing – we don’t know exactly how it appeared and why. The best theory seems to be that it developed as a cognitive and emotional tool that adolescents use in order to test the borders of politeness and truth in conversation, but that’s not really a satisfying explanation. Sarcasm can be understood as a sign of intelligence, or a sign of rudeness. It can be used to make fun of somebody, or to signal a contrary opinion in a different way. But perhaps most importantly, as scientists have recently found – sarcasm is good for you.

Many practitioners will agree that sarcasm often feels like mental gymnastics. Not everyone can do it, and even understanding it often requires a thorough understanding capacity and ability to think in a non-intuitive way. But until now, the science to back that up lacked. Now, new research by Francesca Gino of Harvard Business School, Adam Galinsky, the Vikram S. Pandit Professor of Business at Columbia Business School, and Li Huang of INSEAD, the European business school, found that sarcasm is a process that activates and is facilitated by abstraction, which in turn promotes creative thinking. In other words, yes, sarcasm is like mental gymnastics.

“Not only did we demonstrate the causal effect of expressing sarcasm on creativity and explore the relational cost sarcasm expressers and recipients have to endure, we also demonstrated, for the first time, the cognitive benefit sarcasm recipients could reap. Additionally, for the first time, our research proposed and has shown that to minimize the relational cost while still benefiting creatively, sarcasm is better used between people who have a trusting relationship,” said Gino. 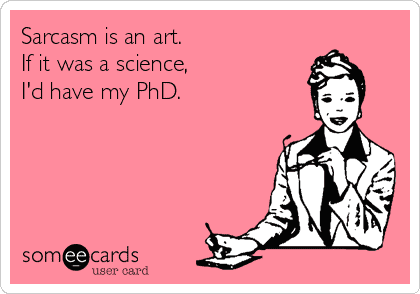 Differentiating between the literal and the sarcastic sense is what prompts the mental exercise.

“To create or decode sarcasm, both the expressers and recipients of sarcasm need to overcome the contradiction (i.e., psychological distance) between the literal and actual meanings of the sarcastic expressions. This is a process that activates and is facilitated by abstraction, which in turn promotes creative thinking,” said Gino.

“Those in the sarcasm conditions subsequently performed better on creativity tasks than those in the sincere conditions or the control condition. This suggests that sarcasm has the potential to catalyze creativity in everyone,” said Galinsky via email. “That being said, although not the focus of our research, it is possible that naturally creative people are also more likely to use sarcasm, making it an outcome instead of [a] cause in this relationship.”

This raises an interesting question: is sarcasm really good for you? Directly, it is. But indirectly… well, not everybody appreciates sarcasm. It can cause a lot of confusion and misunderstandings, or at the very worse, bruise an ego or two. It’s a powerful weapon, so use it carefully.