When researchers at John Hopkins factored human errors they found this was the third leading cause of death in the United States, surpassing respiratory diseases.

by Tibi Puiu
in Health & Medicine, News
Reading Time: 2 mins read
A A
Share on FacebookShare on TwitterSubmit to Reddit

Each year, the Centers for Disease Control and Prevention (CDC) compiles a list of the leading causes of death. This list is based on death certificates filled out by physicians, funeral directors, medical examiners, and coroners.This list, however, does not factor in causes of death associated with human and system factors. When researchers at John Hopkins factored human errors they found this was the third leading cause of death in the United States, surpassing respiratory diseases.

Four studies were assessed that analyzed the medical death rate from 200 to 2008. Based on a  total of 35,416,020 of hospitalizations for 2013, the researchers extrapolated and estimated 251,454 deaths could be attributed to medical error.

Of course, a medical error doesn’t mean that a patient died at the hands of a doctor. The deaths included in the tally include those patients who passed from cancer, heart disease or respiratory disease but didn’t get the right treatment or lacked access to it.

“Medical error has been defined as an unintended act (either of omission or commission) or one that does not achieve its intended outcome, the failure of a planned action to be completed as intended (an error of execution), the use of a wrong plan to achieve an aim (an error of planning), or a deviation from the process of care that may or may not cause harm to the patient,” the researchers write in their paper. 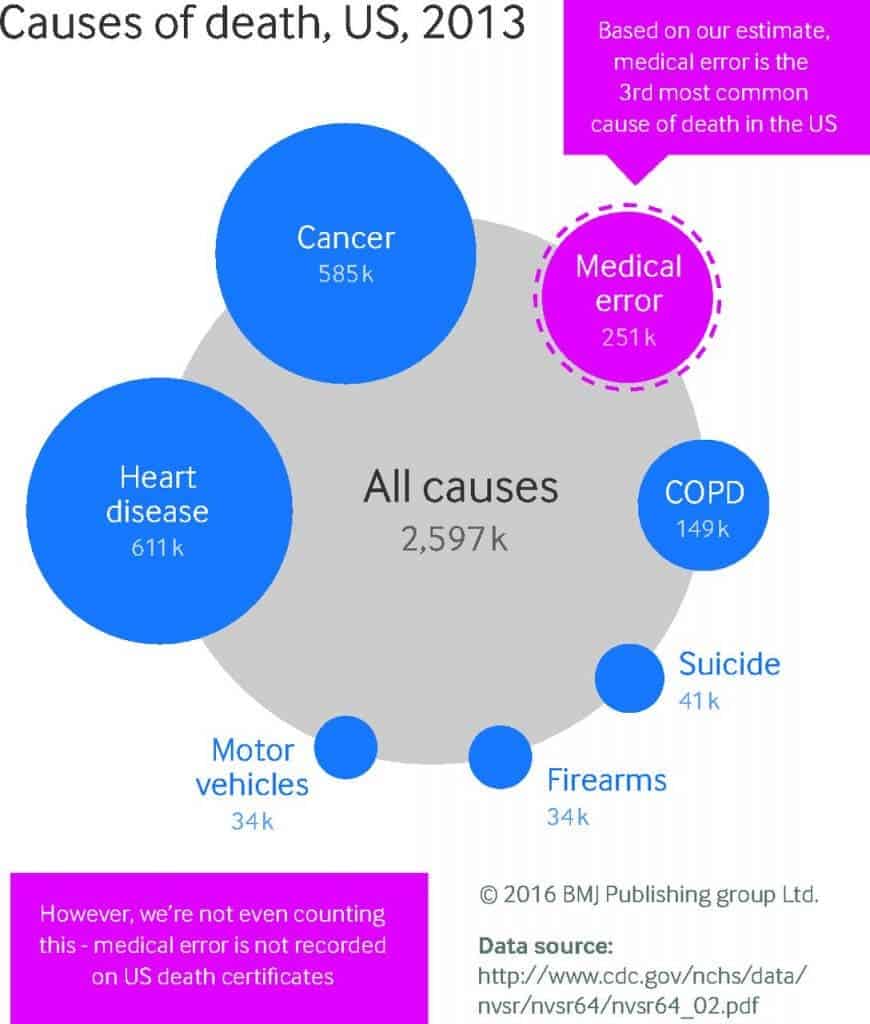 In the paper, the researchers stress doctors aren’t to blame, hence shouldn’t be punished. Instead, they argue that this is a system-level problem stemming from poor coordination, bad insurance work or the absence of safety nets.

“To achieve more reliable healthcare systems, the science of improving safety should benefit from sharing data nationally and internationally, in the same way as clinicians share research and innovation about coronary artery disease, melanoma, and influenza. Sound scientific methods, beginning with an assessment of the problem, are critical to approaching any health threat to patients. The problem of medical error should not be exempt from this scientific approach. More appropriate recognition of the role of medical error in patient death could heighten awareness and guide both collaborations and capital investments in research and prevention,” the researchers note.