25-year old loses all his teeth due to soda addiction

William Kennewel wasn’t a big fan of water – drinking soda instead of it pretty much all the time; now, he has become living proof of the damage soft drinks can cause to your teeth. 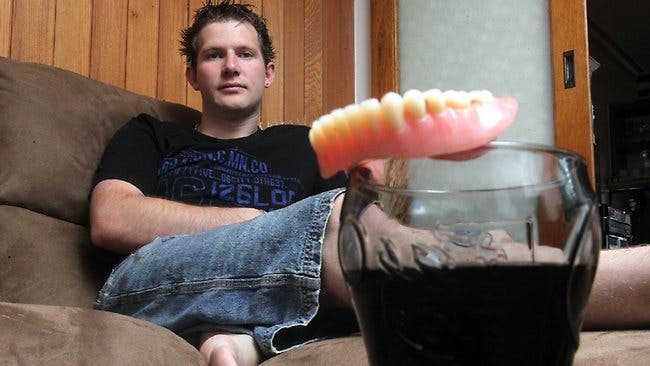 “I’m told a normal person has about 23 teeth, but … I only had 13 left and they had to be removed,” he said. “It started because I wasn’t a huge water fan and working in the hotel industry, I had easy access to Coke. Because my teeth were decaying so badly, it caused blood poisoning which just made me sick, but my health improved with the dentures.”

He reported drinking some 6-8 liters of soda each day, an addiction he tried to fight but just couldn’t, despite warnings from doctors and dentists. This raises further concerns about people not really understanding the huge health threat posed by regular consumption of soft drinks. Australian Research Centre for Population Oral Health senior research fellow Dr Jason Armfield has called for health warnings on labels to include risk of tooth decay.

“However, singling out one particular part of the diet is a misguided approach to dealing with an issue such as dental hygiene,” he said.

Despite losing all his teeth, Kennewel believes such a warning would do little prevention good, and he believes that even his case isn’t a strong enough proof against drinking lots of soda. But if you care about your teeth (not to mention other affected areas), you really should take example from him and lay back on your soda (and energy drinks) habits.