How humans and squids came to have similar eyes

by livia rusu
in Animals, Genetics

Humans and squids are not exactly close relatives – as a matter of fact, we’re really different from squids, so how come we came to have surprisingly similar eyes? The answer, as usually, is in our genes. 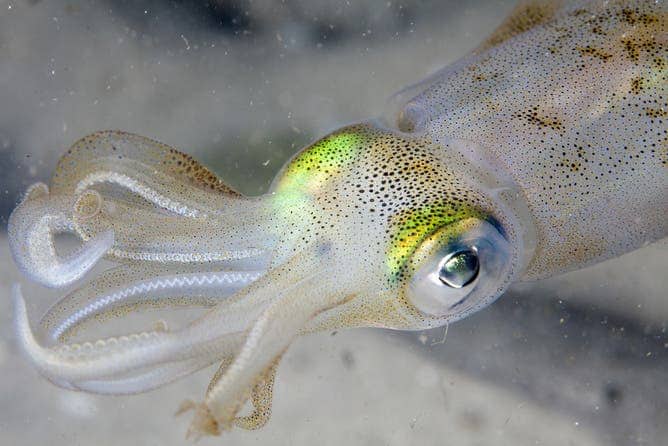 Eyes are complicated things – and like all organs, they rely on many genes working together, keeping everything fit and tight. Most of the genes involved in making the eye read like a parts list – this gene makes this, and that gene makes that. But, like in any orchestra, you need someone to direct and tell the others what to do – the same goes for genes. That gene here is called PAX6.

Like all genes, PAX6 works sort of like an instruction code, written in DNA language. In order for it to work, it first has to be translated into a different code, which is RNA. The interesting thing is that RNA can be edited – things can be added, things can be removed, and more interestingly, things can be spliced – that is, removing a piece from the middle of the code, and stitching the two ends together. Due to this editing, sometimes RNA sequences can become identical following different paths.

Such is the case with the human eye. In a new study, Atsushi Ogura at the Nagahama Institute of Bio-Science and Technology and colleagues found that Pax6 RNA splicing has led to the development of a camera eye in a surprising lineage which occurs in the cephalopods – a group which includes squid, cuttlefish, and octopus. The fact that the gene can be found in cephalopods, mammals and birds shows that the gene developed before the diversification. It’s remarkable that it reached such similarities through different paths, so that an organisms like humans and cephalopods have similar eyes, after hundreds of millions of years of parallel evolution.