Pressure to be thin influenced by genetics, study finds

by Tibi Puiu
in Genetics, Psychology, Studies
Reading Time: 2 mins read
A A
Share on FacebookShare on TwitterSubmit to Reddit 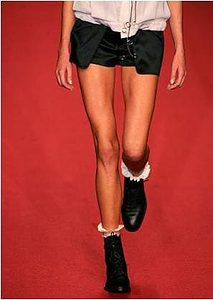 Be tall, be thin, be beautiful. The media has made sure we’re constantly bombarded by such imperatives, and aside from frustrations, some people have gone to such extremes to fit popular media expectations that they end up hurting themselves. This is, sadly, most evident in the case of women, where eating disorders or anorexia are frequently encountered. A new study, however, says that some women may be genetically predisposed to becoming vulnerable to idealized body size pressure.

The researchers sought out to measure to what degree women bought into the perceived ideal of thinness, which the researchers call thin-ideal internalization. With this is in mind, scientists at Michigan State University, performed tests for 300 female twins aged between 12 and 22. An assessment of how much participants wanted to look like people from movies, TV and magazines was made, after which a comparison was made between identical twins who share 100 percent of their genes and fraternal twins who share 50 percent. It was found that identical twins have closer levels of thin idealization than fraternal twins, implying genetics had a significant contribution.

Upon a closer look, the researchers were surprised to find that the heritability of thin idealization is 43 percent, meaning that almost half of the reason women differ in their idealization of thinness can be explained by differences in their genetic makeup. Thus, the study shows that media exposure to idealized body size has a less significant role to play than previously thought.

“We were surprised to find that shared environmental factors, such as exposure to the same media, did not have as big an impact as expected,” said Jessica Suisman, lead author of the study. “Instead, non-shared factors that make co-twins different from each other had the greatest impact.”

The study, funded by the National Institute of Mental Health, appears in the International Journal of Eating Disorders.