by Mihai Andrei
in Health & Medicine, Inventions
Reading Time: 2 mins read
A A
Share on FacebookShare on TwitterSubmit to Reddit

3D printing is the stuff of the future – today. It’s one of the most stunning pieces of relatively accessible technology; most notably in medicine, the precision offered by 3-D printing can make tiny surface details on the replacement part that encourage the growth of cells and allow the bone to attach more easily. In a specific case, 3D printing technology has helped replace 3/4 of a patient’s skull. 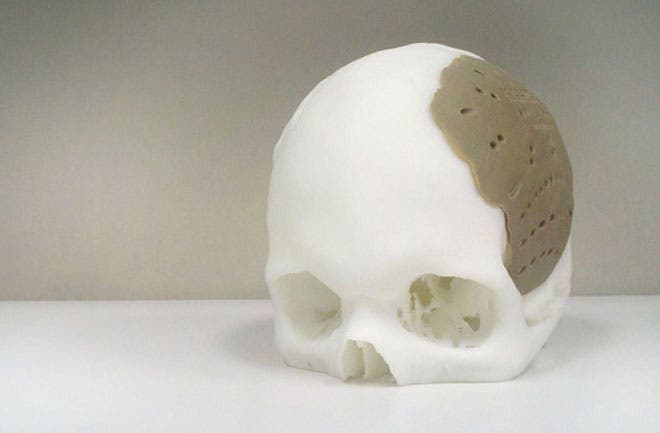 This technology could help replace the bone in people’s skulls damaged by disease or trauma – much better than existing solutions. But not only is this technology available and can do wonders for patients, but it was also regulated by the FDA – something which usually takes much more time, especially with something like this, which will virtually impact the entirety of orthopedics.

“We see no part of the orthopedic industry being untouched by this,” said Scott DeFelice, president of Oxford Performance Materials.

DeFelice’s company is already selling 3D-printed implants overseas as a contract manufacturer, but now the big door to the US has opened – according to DeFelice, some 300-500 people would need such an implant every month, either due to some type of bone cancer or trauma.

3D printing brings a big advantage to the table: it basically digitally scans an object and then prints out a matching, 3D replica, layer by layer, with very high fidelity and detail level.