by Mihai Andrei
in Animals, World Problems
Reading Time: 2 mins read
A A
Share on FacebookShare on TwitterSubmit to Reddit

Tho global meat giants with shady food and environmental safety records shook hands as they are planning to become the world’s biggest meat producer. Smithfield Foods, the largest pork producer in the U.S., has been bought by China’s Shuanghui International Holdings Limited for $4.7 billion. The global meat industry, which is grasped firmly by a handful of companies will become even less competitive than it is today. 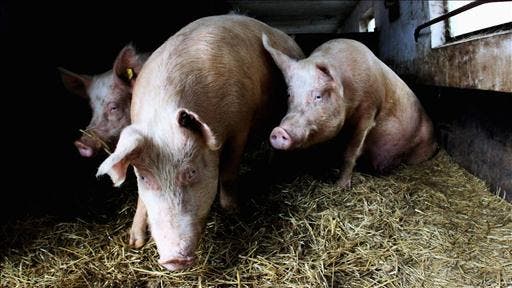 Why is this a bad thing? Well, the lack of competition is always a bad thing – regardless of field. Everything from evolution to food safety has everything to benefit from a little (or even a little more) competition – if one giant conglomerate controls most of the market, we have every reason to believe that the food (and environmental) safety standards will drop to more abysmal depths.

Both Smithfield and Shuanghui have had problems due to their unethical practices: Smithfield has come under criticism for the millions of gallons of untreated fecal matter it produces and stores in the lagoons. In a four-year period in North Carolina alone, 4.7 million gallons of hog fecal matter were released into the state’s rivers. In 1997, the company was fined $12.6 million in 1997 by the Environmental Protection Agency (EPA) for 6,900 violations of the Clean Water Act after discharging illegal levels of slaughterhouse waste into the Pagan River in Virginia.

In 2011, a Shuanghui plant was caught feeding their pigs an illegal additive, clenbuterol, to speed muscle growth. 300 people fell violently ill after eating the clenbuterol pigs. They, much like Smithfield, have a background with abusing employees, animals, and the environment. 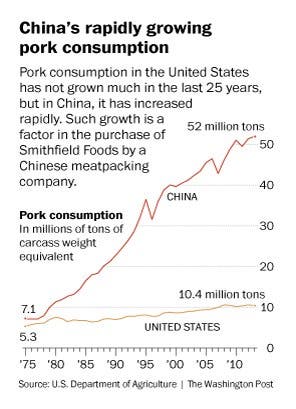 China’s pork consumption is absolutely staggering – dwarfing American dramatically. As a matter of fact, American pork consumption had just started dropping, but one can not help but wonder if this aggressive move by the Chinese won’t increase the consumption once again.