by Alexandru Micu
in Design, Environment, News
A A

A Dutch design student’s simple but brilliant alternative to modern packaging could help us reduce both trash and fuel usage in one swoop.

Almost all household products currently in your home, from detergent to stick deodorant, have water. Some of it is chemically tied in the products, but the rest is just there to ensure it has the right composition or flows properly. However, all of that water has one thing in common — it doesn’t have to be there when you buy the product. At least, that’s the idea behind Dutch design student Mirjam de Bruijn‘s project Twenty.

A quick review of the labels featured on household products at home showed Mirjam that they’re almost 80% water. It doesn’t make much of a difference in a single product, but across the billions of individual goods shipped around the world each day, it adds up to a huge volume and weight.This results in more materials for packaging, less usable space in containers, and most importantly, higher fuel consumption and more pollution generated.

Her idea was to take the water out of these products and have them ship and retail as de-hydrated solids. After purchase, consumers would place these goods in reusable bottles, add water, and voila! Instant product!

The concept became de Bruijn’s thesis at the Eindhoven Design Academy. If this method were to be widely adopted, de Brujin is confident it would reduce per capita plastic packaging waste on the domestic market significantly. In our increasingly global and interconnected world, however, it would also have a big impact on trade. Taking all that water out of the products will dramatically reduce both their weight and volume and consequently would slash costs in the shipping sector — which accounts for around 90% of global transport and gives off 4% of global emissions, according to GreenBiz.

And it’s a tried and tested idea, to boot. Take laundry detergent or condensed milk: they’re both dehydrated products that have to be mixed with water to be of any use, but they’re much simpler to carry around than their hydrated counterparts.

In de Bruijn’s Twenty, the chemical concentrates (the little spheres and other shapes with the 20% stamped on them) are the actual conceptual element of the project. However, she took the project a step further and designed a line of packaging based on the idea. The packaging is meant to be fully recyclable, and mostly uses cardboard and plastics.

Personally, the engineer in me simply purrs in pleasure at seeing her work — it’s just so tidy and efficient! It also makes a lot of economic sense, so we’re bound to see some companies pick up the idea sooner or later. And this time, companies cutting costs will actually help both you and the environment. Win, win, win! 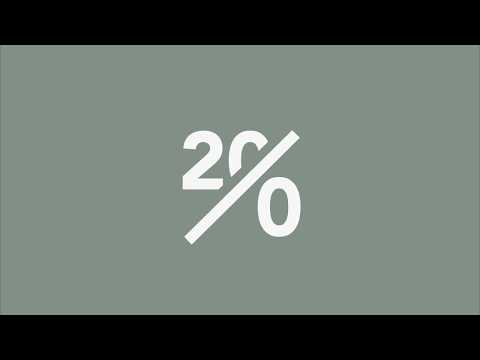