I just swear, science is just like fashion sometimes – some treands just reappear time and time again over periods of time. What am I talking about? Well, this is one of the first posts I’ve ever written on ZME Science, all the way back in 2007 (man this brings out memories!). Basically, back then, WHOI researchers were suggesting an iron fertilization of the oceans to fight global warming. Why? Well, as I was telling you in 2007… 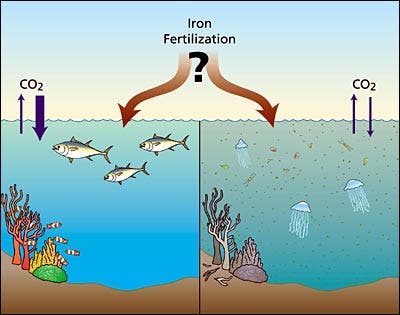 In 1980, famous oceanographer John Martin famously told colleagues: “Give me half a tanker of iron and I’ll give you the next ice age.” He was thinking about plankton. Like humans, plankton needs iron to survive and thrive – the ocean is not exactly teeming with iron though, so the plankton expansion is limited by this lack of iron.

Phytoplankton consumes carbon near the surface of the ocean through photosynthesis; the ocean surface has a tight chemical connection to the atmosphere and it basically sucks out the CO2 from the atmosphere, not only slowing down global warming, but if a tipping point is reached, actually creating a global cooling. This was actually proven by paleoclimate analysis – high oceanic iron levels always coincide with temperature drops.

But researchers wanted a more exact analysis of the periodic variance of iron levels. To investigate this and the long-term influence of iron on phytoplankton, Richard Murray of Boston University and a multi-institution team of scientists studied prehistoric sediments buried in the seafloor. Alongside iron, they also analyzed opal – a material often used in jewelry, but which is marine researchers use as an indicator of phytoplankton abundance. Opal is secreted by diatoms as material to form diatom shells. Diatoms are among the most common and important kinds of phytoplankton.

They found that in the past million years, iron levels are closely associated with opal levels – signifying that whenever iron levels peaked, so did plankton levels, and subsequently, temperatures dropped. But could this actually be used now, as a method to fight global warming? The answer is pretty much no – we don’t understand the parameters of this mechanism, and in the end, we could end up creating major unbalance in oceanic ecosystems. But researchers are understanding the aspects of this problem more and more, and who knows – maybe with a tanker of iron, we could actually stop global warming.