Mining disaster in Brazil is an environmental catastrophe

The collapse of two dams at a Brazilian mine spells an absolute catastrophe, with effects that could haunt Brazil for years to come.

by Alexandra Gerea
in Environment, News
Reading Time: 3 mins read
A A
Share on FacebookShare on TwitterSubmit to Reddit

The collapse of two dams at a Brazilian mine spells an absolute catastrophe, with effects that could haunt Brazil for years to come. 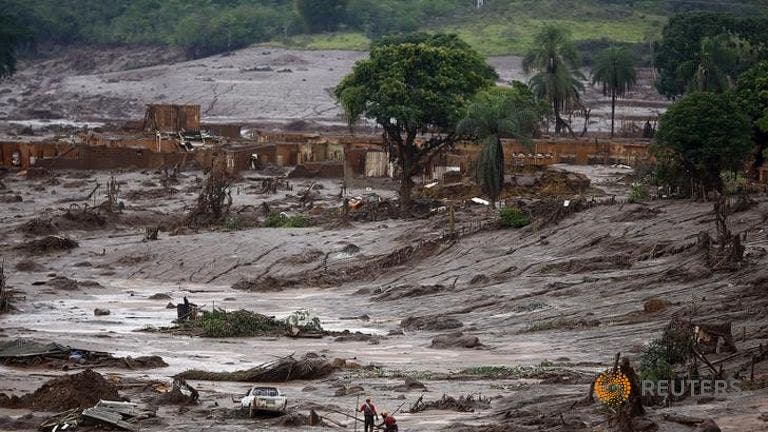 Nine people were killed, 19 are still listed as missing and 500 people were displaced from their homes when the dams from an iron ore mine in southeastern Brazil broke, but that’s just the initial effect. The sheer volume of waste gorging from the dams is staggering: spreading across 500 km, some 60 million cubic meters of mining waste – the equivalent of 187 oil tankers.

The owners of the mine, Samarco Mineração SA (a joint venture between mining giants Vale SA and BHP Billiton) has repeatedly said the mud is not toxic, but scientists disagree. Over 250,000 Brazilians are now left without a supply of drinking water, and local authorities have ordered rescued families to wash thoroughly and dispose of clothes that came in contact with the mud.

“It’s already clear wildlife is being killed by this mud,” said Klemens Laschesfki, professor of geosciences at the Federal University of Minas Gerais. “To say the mud is not a health risk is overly simplistic.”

But again, this is just the initial effect; as the sludge continues to harden, farming will become more and more difficult, and the crops may even be unsafe for consumption. The thing is, the statements of the mine owners have already been shown to be untrue, so researchers are trying to determine the chemistry of the mud themselves, through in-situ testing. The results will be published in the following weeks, but at the very least, some of the compounds “are not readily biodegradable and have high toxicity to aquatic organisms,” according to the company that produces them.

“There will be serious problems using the water from the river now,” says Pedro Antonio Molinas, a water resources engineer and mining industry consultant familiar with the region.

The local environment will also suffer greatly, and it seems quite likely that many areas will never recover. The mouth of the Rio Doce is a nesting area for endangered sea turtles, an animal sensitive to chemical changes in the water. The beaches are expected to turn a deep red, and there is no clear estimate about the ultimate extent of the damage.

“It is a tragedy of enormous proportions,” Marilene Ramos, president of Ibama, the federal environmental agency, said. “We have thousands of hectares of protected areas destroyed and the total extinction of all the biodiversity along this stretch of the river.”

The dam collapse highlighted what many already knew: mining in Brazil is hazardous and damaging to the environment, and the country isn’t really well prepared when something bad takes place.

“Who had the brilliant idea of opening the dams along the river?” asked marine biologist Andre Ruschi in a Facebook post, referring to the decision by authorities to open dams along the Rio Doce to allow the surge to dissipate and proceed toward the ocean.

He does make a very valid point – where was the leadership? We don’t know what caused the collapse of the dams, we don’t really know what went wrong at the mine, but the response of the authorities has been a complete fiasco. The government’s inability to react can be used as an example of what not to do, and the mining conglomerate ducked the public at first, only issuing a press release the day after the disaster happened. The president herself was slow to react, and even when she did go to the area, she only did a helicopter tour, sounding surprisingly upbeat after it:

“If we all join hands and work together, we can overcome this crisis more quickly,” Rousseff told reporters on Thursday.

She, like most officials, didn’t seem too motivated to start pressing for answers, for punishments, and more importantly – for solutions. This raises even more questions about the possible corruption of politicians, seen by many as the allies of the mining, timber and oil companies.