I can’t believe this hasn’t existed before – one simple app fed 600,000 people

It's so simple and incredibly useful I can't believe no one developed it before - a way to give leftover food from parties and meetings to homeless people who really need it.

It’s so simple and incredibly useful I can’t believe no one developed it before – a way to give leftover food from parties and meetings to homeless people who really need it.

A simple lunch with a homeless vet forever changed the life of Komal Ahmad forever, and potentially, that of millions of homeless people. Three years ago, Komal (now aged 25) was walking in the campus when a homeless man approached her and asked her for money to buy food. She invited him to lunch and heard his story; he was a veteran, recently returned from Iraq and going through a really rough patch.

The experience blew her mind, and motivated her to start an initiative at the university which allowed the dining hall to donate any excess food to local homeless shelters. The initiative became really popular and in 3 years, it spread to some 140 colleges and universities across America in just three years. She called hunger “the world’s dumbest problem”, because we waste so much food:

“Hunger is bad – it’s terrible everywhere – but in America, in the most prosperous, industrialised country in the world, this just shouldn’t exist.” Putting the problem into perspective, she said: “Imagine a football stadium filled to its brim. That’s how much food goes wasted every single day in America.”

So she started her own not-for-profit company called Feeding Forward along with classmate Chloe Tsang; together, they found a way to get campus food waste onto the plates of local people who were going hungry. Her initiative sparked food waste “forwarding” and already, some 600,000 people were fed in the San Francisco Bay area alone. 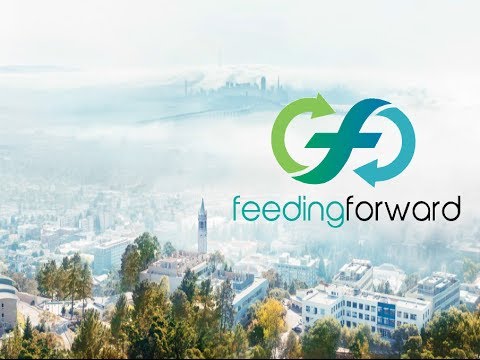 The app, called Feeding Forward, is so simple in concept it’s almost a crime no one thought of it before. Whenever an event or business has some leftover food, a driver comes up and picks up the food and delivers it to wherever it’s needed most. Just think about it for a bit, the potential is limitless: parties, cafeterias, ready-made grocery store items, sports events… everything has some leftover food which can be valued and sent to the people who need it.

To make things even cooler, the app went viral when CNET picked the idea up and now there are thousands of requests to expand the project to other cities and countries.

“I didn’t expect it to blow up,” she said in an interview. “People as far as Nairobi, Bangalore and Hong Kong have wrote us [sic] asking us to expand Feeding Forward to their cities and countries.”

The app is currently undergoing some improvements and will be back in August.