Salmon versus Gold clash in Alaska

by Mihai Andrei
in Animals, Environmental Issues
Reading Time: 3 mins read
A A
Share on FacebookShare on TwitterSubmit to Reddit

It’s the already a clichee: the big, international company wants to do some highly profitable operations, threatening the native wildlife and environment. 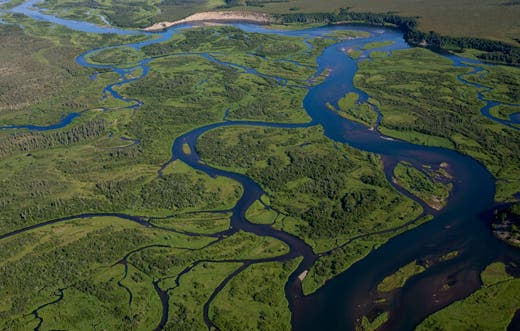 This time, the corporate behemoth is Northern Dynasty Minerals, of British Columbia, who teamed up with other companies, and now name themselves the Pebble Partnership. In the other corner lies native groups, commercial fishermen, village councils, local residents, outfitters, conservationists, and other communities, convinced that the environmental risks, especially those addressed to salmon greatly outweigh the benefits.

Pristine, roadless and wild, the Bristol Bay watershed is host to the largest population of wild salmon in the world – over 30 million salmons. Unfortunately for them, quite close to their natural habitat, there’s also a huge ore deposit, estimated at 36 billion kilograms of copper and 3 million kilograms of gold – quite easy to understand why big mining companies would want to be all over it.

After numerous legal skirmishes and petitions from both sides, the big battle is finally closing in – and it promises to be a turning point for Alaskan exploitation of resources. Either way it will go, it’s going to set up a precedent that will be hard to avoid in future cases.

Back in May, the U.S. Environmental Protection Agency (EPA) released a draft assessment of the potential consequences of a Pebble Mine-like development, and according to them, even under the best conditions, the most optimistic prognosis, which is never going to happen, is that 90 to 140 kilometers or pristine streams will be contaminated, as will 1,000 hectares of wetlands. But even more worrisome is the possibility of a catastrophic failure of one of the mine’s tailings ponds, which would have devastating consequences.

Guess what happened then? The Pebble Partnership went to state officials to blame these results and complain. Not surprisingly for Alaska, state officials agreed with the company, dismissing the results. Soon after that, the EPA gathered another committee of independent researchers. Care to take a guess, again? This new committee concluded that if anything, the initial study underestimated the risks.

“Given the extremely long-term nature of the project,” one reviewer wrote, “the risks seem, if anything, understated.”

Then, nine Bristol Bay tribal governments made quite a bold move – bypassing the state officials, fearing that they don’t understand or don’t care enough about these findings and went straight to the federal government. Citing a provision of the U.S. Clean Water Act, which governs dumping waste in streams, they had a pretty strong case, and went to the EPA for help. Following this approach, both the governor of Alaska and the Pebble Partnership have made pressures on the EPA, accusing it of overreach and threatening legal action. Back in the day, sadly, this would have done the job. The state could have just ignored the scientific facts, or just dismiss then as inaccurate and establish its own puppet committee; but this time, it seems, something has changed in the heart of Alaskans: the public opinion is heavily against mining in the Bristol Bay.

They fought for their natural treasures, trying to make the rest of the country that this is a national treasure, and should be guarded as such. What do you think, should the Pebble Partnership be allowed to start mining in the Bristol Bay?