These are the greenest countries in the world

Get it together, world – the top 10 greenest countries in the world are all European! 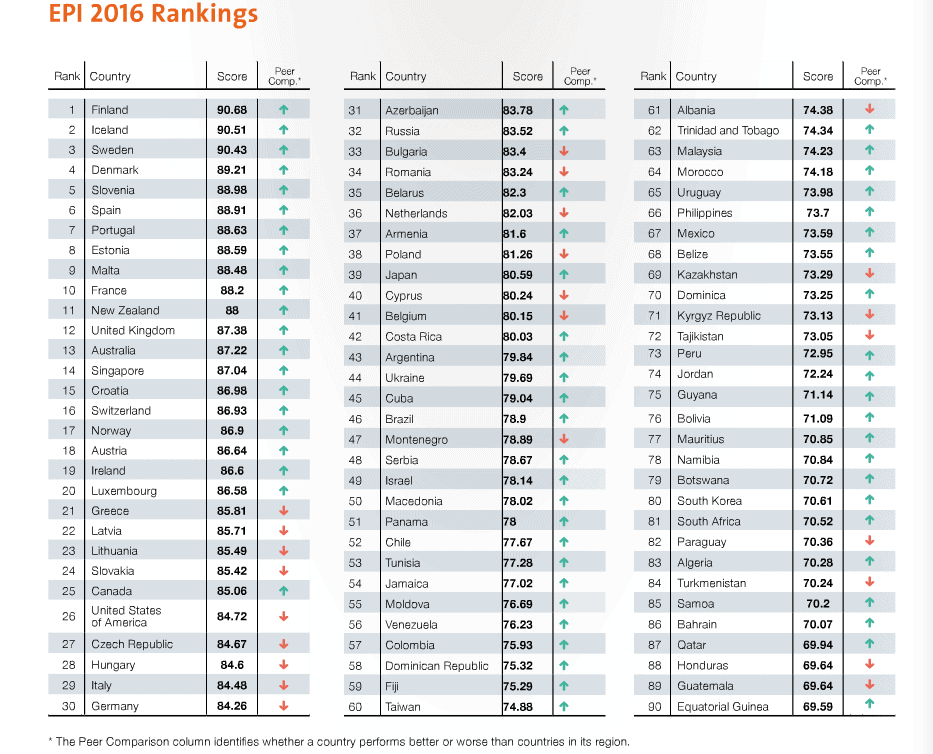 The 2016 Environmental Performance Index (EPI) is a Yale-developed method to quantify the environmental performance of a state; it’s a measure of how ‘green’ a country is. Of course, like any index it has its pros and cons, its supporters and contestants, but this is one of the most widely used and most representatives measures of what a country is doing right. It’s highly intriguing that no country outside of Europe manages to make the top 10.

The main findings are pretty clear: improved access to water and sanitation has spread throughout the planet, and as a result waterborne diseases have dropped massively. There has also been improved emphasis on habitat protection, as many countries declare more and more protected areas. But not all is good. The world’s fisheries are drawing closer and closer to a total collapse, and air pollution grows to unprecedented levels, causing 10% of the total global fatalities.

“While many environmental problems are the result of industrialization, our findings show that both poor and wealthy nations suffer from serious air pollution,” said Angel Hsu, Assistant Professor at Yale-NUS College and the Yale School of Forestry & Environmental Studies (F&ES) and lead author of the report. The EPI shows that focused, coordinated global efforts are essential to make progress on global goals and to save lives.
“The EPI sends a clear signal to policymakers on the state of their environment and equips them with the data to develop fine-tuned solutions to the pressing challenges we face,” said EPI co-creator Kim Samuel, Director, Samuel Group of Companies and Professor of Practice at McGill University’s Institute for the Study of International Development. “With the very survival of the planet at stake, we hope leaders will be inspired to act—especially in urban areas where an increasing majority of the world’s population lives.” 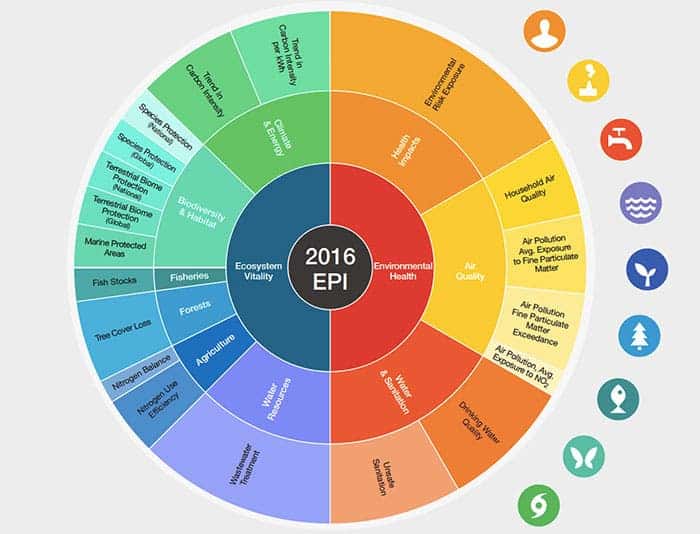 Coming after the COP21 in Paris, this report arrives at a highly opportune time; we now agreed that the world’s climate is in dire straits, we’ve decided that we have to do something, and we’ve quantified who’s playing their part and who isn’t – now it’s up to the policy makers to actually do something.

“Even when data exists, policymakers often struggle to apply this information appropriately,” notes Marc Levy, Deputy Director of the Center for International Earth Science Information Network (CIESIN) at Columbia University. “The EPI works to identify and address these blind spots within existing policy goals. For instance, a new biodiversity indicator weeds out protected areas that do not intersect with species’ habitats, showing where national parks may be ineffective at protecting species.

Big countries like the United States should take a hint too – their standing is not so great at 26th. Also, while these are country level estimates, local or regional areas can vary greatly within the same country, so while the broad information is extremely useful, local information is even more useful for policy makers. Appraising environmental quality at the city or regional level can sharpen environmental management strategies, but large-scale information offers a much needed benchmark for countries as a whole.