by livia rusu
in Climate

Texas Professor Katharine Hayhoe is among the American Geophysical Union’s 2014 award-winners for science communication, announced on July 3. This is only the third time AGU has given an award for science communicaton, and they hope that she could help end – or at the very least quench – the war between religion and climate change science.

Hayhoe is an active climate scientist – and a Christian as well. Her credentials are rock solid: she is the director of the South Central Climate Science Center, she worked on some of the IPCC reports, has an impressive number of published articles and constantly advises officials on preparing for heat, drought, and other effects of the changing climate.

But for most people, she’s not known for that. She’s known because, along with her husband (an Evangelical pastor) she’s trying to bridge the apparently irreconcilable worlds of science and religion – when it comes to climate change at least. The fact that they are both conservative Christians helps reach the many believers and tries to convince them to act and stop global warming. 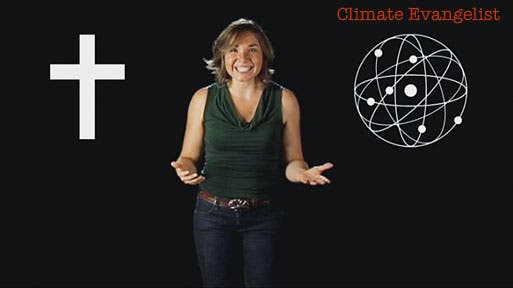 They’re using the Bible to try and convince people to act. Now, normally, I’m not a fan of quoting from the Bible, but if it helps get things done, and if it convinces people to act against global warming, I’m all for it. What they’re using is an excerpt from Genesis 2:15 about God’s creation — “watch over and care for it”. They use this as a reference for sustainability: “our uses of the Earth must be designed to conserve and renew the Earth rather than to deplete or destroy it.” Awesome! But they’re doing even more.

Hayhoe and her husband recently published a book called A Climate for Change  – which explains things in a way that Christians can relate to, rather than antagonizing them. This gets the job done, and as a result of their efforts, more people understand that climage change is happening, and we are causing it – and furthermore, that we should take action to try and preserve it. To me, the AGU award is well deserved.

But even she admits that among the masses, there are sometimes people which simply refuse to listen to arguments.

“It would take an act of God to change their minds,” she says dryly.