More Americans than ever acknowledge climate change is real

On the heels of the warmest winter on record, a Gallup poll found a record number of Americans perceive global warming as a serious threat. It doesn't sound like a coincidence.

On the heels of the warmest winter on record, a Gallup poll found a record number of Americans perceive global warming as a serious threat. It doesn’t sound like a coincidence.

Gallup reports forty one percent of those surveyed believe climate change poses a serious threat to their way of life. Since Gallup first started tracking climate change opinion among the U.S. populace, this is the highest level of acknowledgement witnessed thus far. 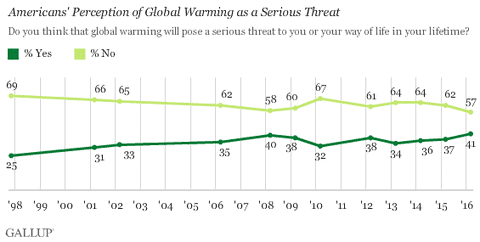 So, the good news is that Americans are becoming more aware of the scientific reality of man-made global warming, which is backed by virtually every reputable climate scientist on the planet with striking confidence. The bad news is that forty one percent is still far from a tipping point that might actually sway policy makers to do something really tangible about it. In Germany, a country with roughly the same level of awareness about climate change perils as the U.S., the level of perceived threat among the populace is sixty percent. In the past decade, Germany has broken every solar record year in, year out. Wind and solar generated 40.65 GW of power in Germany in 2015, while the U.S. — a country 27 times larger than Germany by surface area — only had 18.3 GW of installed solar capacity. 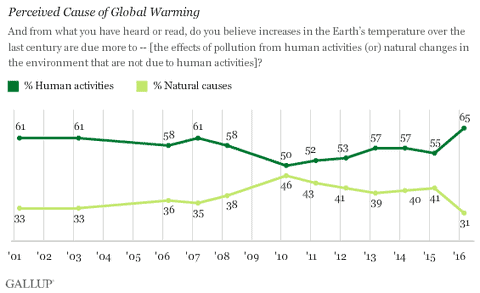 The same Gallup pole a record number of Americans believe global warming is caused by human activities — sixty five percent believed this is the case. That’s a ten points increase compared to last year. So what happened in between to mark this rise in awareness? A number of factors might have helped. For one, last year was the COP21 conference in Paris where world leaders agreed to limit emissions such that temperatures might not exceed two degrees Celsius over the Industrial Age average by 2100. The conference was immensely publicized by many media outlets, including ZME Science which covered the event live on site. Record heat waves, which are noticeable to anyone PhD or not, also left a lot of previously unconvinced people scratching their heads.

Look the above graph and you’ll notice something else too. Man-made climate change acknowledgement dropped from 2008, the first year of full-blown recession. In only two year, opinion among Americans that climate change is caused by humans dropped by ten points. So, as you can see opinions can change both ways very, very fast. Today marks some good news, but we — all of us who care about the planet and are aware of the imminent risks of unabated unsustainable energy generation — ought not to rest on laurels. There is still much work ahead.