This missing link provides a glimpse into how different dinosaurs groups split and evolved differently.

When it was first discovered a couple of years back, Chilesaurus diegosuarezi stunned scientists with its patchwork appearance. This 145-million-year-old creature had the legs of a Brontosaurus, the hips of a Stegosaurus, and the arms and body of Tyrannosaurus rex. Ever since it was first described, paleontologists have been scrambling to find its place in the dino family tree. Now, a new study shows that its previous classification is wrong. Instead, the Frankenstein-like dinosaur occupies a far more important position, being a transitional species between herbivore and carnivorous dinosaurs.

The black sheep of the dino family

According to Matthew Baron, a PhD student at Cambridge University and lead author of the new study, Chilesaurus is, in fact, an early ornithischian. Previously, scientists thought Chilesaurus was a theropod. Despite its raptor-like appearance, our weird-looking dinosaur was more closely related to ornithischians like the long-beaked plant-eating Triceratops and Stegosaurus.

“We had absolutely no idea how the ornithischian body plan started to develop because they look so different to all the other dinosaurs. They have so many unusual features,” Baron told the BBC. “In the 130 years since the ornithischian group was first recognised, we have never had any concept of how the first ones could have looked until now.”

The ornithischian group has always been puzzling since members didn’t seem to be related to all other dinosaurs, though evidently, they had to come from somewhere. Then, in a paper published in Nature earlier this year, Baron proved that these dinosaurs were more closely related to carnivores like T-rex. The new study published in Biology Letters settles things further by providing a re-configured, far more precise family tree.

The University of Birmingham researchers who first studied and classified Chilesaurus based their work on the structure of the hips, which look like those of a theropod at first glance. Ornithischians, it turns out, have differently-shaped hip regions that resemble those of living birds. This configuration was more conducive to complex digestive systems that allowed these plant eaters to go down their own beaten evolutionary bath, Gizmodo reports. 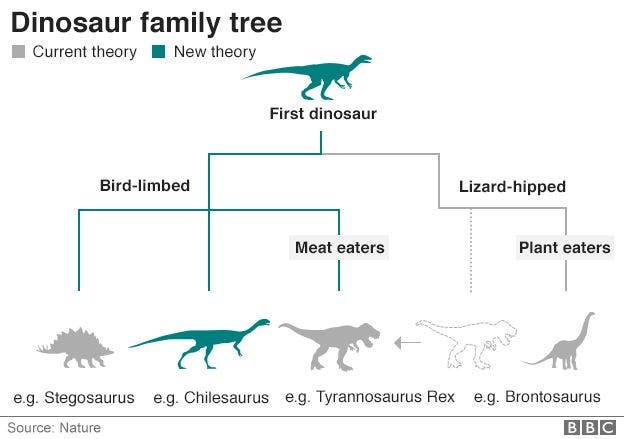 Chilesaurus, absent the characteristic ornithischian beak and its slender raptor-like body, is still an outlier. That’s because, as Baron and colleagues would learn, this is a transitional species. It fits the slot between ‘mainstream’ ornithischians and meat-eating dinosaurs such as Tyrannosaurus. “It is a perfect half-and-half mix,” Baron reckons.

The 3-meter-long dinosaur is really important because it helps explain how different groups of dinosaurs split from one another and evolved along different paths. This finding could be so transformative, it could change the dino family tree which has stood the test of time for more than 130 years. But before the so-called ‘Baron tree’ takes off, his paper needs to pass critical scrutiny from peers.