Scientists have found a much more efficient way of converting CO2 into methanol, using a catalyst with oxide nanoparticles. The resulting system makes the conversion almost 90 times faster than currently existing systems.

by Dragos Mitrica
in Chemistry, Environment, News
Reading Time: 2 mins read
A A
Share on FacebookShare on TwitterSubmit to Reddit 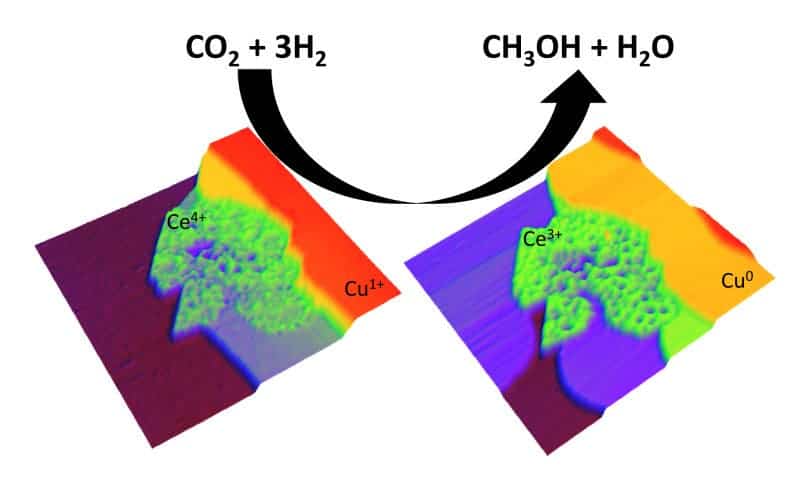 Turn that frown upside down – scientists have found a way to take convert carbon dioxide (CO2) into methanol – a key commodity used to create a wide range of industrial chemicals and fuels. The catalytic system has a much higher efficiency than currently existing systems and makes it easier to get normally unreactive CO2 to participate in the reaction.

“Developing an effective catalyst for synthesizing methanol from CO2 could greatly expand the use of this abundant gas as an economical feedstock,” said Brookhaven chemist Jose Rodriguez, who led the research.

It’s even possible to envision a future where such catalysts are used to reduce the accumulation of greenhouse gas, by capturing carbon dioxide and recycling it to synthesize new fuel. This of course depends on many factors – the most important one being economic feasibility. Their work shows a good proof of concept, paving the way for future such systems to become a reality.

“Our basic research studies are focused on the science-the discovery of how such catalysts work, and the use of this knowledge to improve their activity and selectivity,” Rodriguez emphasized.

When it comes to catalysts, the problem with CO2 is that it’s not a team player – in other words, it generally has very weak interactions with other catalysts. This team used a catalyst composed of copper and ceria (cerium-oxide) nanoparticles, sometimes also mixed with titania, which ensured a remarkable CO2 reactivity. Their work revealed that the metal component of the catalysts alone could not carry out all the chemical steps to transform the CO2 into methanol, but the oxide nanoparticles worked out very well.

“The key active sites for the chemical transformations involved atoms from the metal [copper] and oxide [ceria or ceria/titania] phases,” said Jesus Graciani, a chemist from the University of Seville and first author on the paper.

The catalyst they developed converts CO2 to methanol more than a thousand times faster than plain copper particles, and almost 90 times faster than a common copper/zinc-oxide catalyst currently in industrial use. The study illustrates how the right approach (in this case, adding oxide nanoparticles) can dramatically improve results.

“It is a very interesting step, and appears to create a new strategy for the design of highly active catalysts for the synthesis of alcohols and related molecules,” said Brookhaven Lab Chemistry Department Chair Alex Harris.