The wild chimpanzee who cared for her disabled child

In a stunning display of empathy and care, a wild chimp mother has been observed caring for an infant with severe disabilities. It’s the first time something like this has been ever observed. 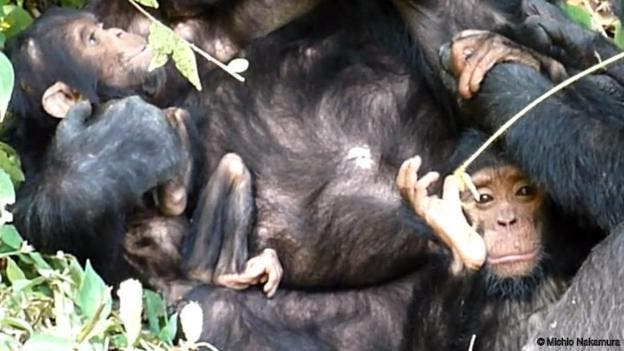 Anywhere between 95 and 98% of chimp DNA is similar to human DNA — they’re our closest living relatives, and we have many things in common with them. An infant chimp, named XT11 has similar symptoms to what in humans would be called Down syndrome. It is incapable of feeding itself and has trouble walking. She also suffers from hernia on her stomach (see above), spinal damage and an extra, inactive finger on her left hand. Normally, the offspring would be abandoned by its parents, but this is not the case.

His mother, Christina, completely changed her lifestyle to care for the infant. She no longer fishes for ants in trees because she needs her hands free to carry XT11. But she doesn’t seem to be willing to give up on her child.

“The mother of a severely disabled infant probably experiences more stress than other mothers because she must provide intensive care for longer,” the authors write in the journal Primates.

The small chimpanzee is capable to hold on to her mother. Sometimes, the older sister would help in for the mother. However, other relatives were not allowed to carry XT11, something which is very unusual. This is likely because the mother knows that others don’t understand her special needs. However, the sister’s extra care stopped when she had her own child.

“There were some cases where the mother spontaneously gave the infant to the elder daughter. This is quite unusual for a mother to do,” says Michio Nakamura, co-author of the study from Kyoto University, Japan. “While the elder sister was taking care of the disabled infant, the mother climbed on a tree to feed on fruits,” he told BBC Earth.

Ultimately, XT11 didn’t make it. It’s unclear what brought on her demise, likely something to do with her limited diet. Still, this is an incredible sign of empathy and shows us once more just how similar chimps and humans really are. Another remarkable aspect is that their relatives showed no negative behavior towards the handicapped infant.

“The mother’s compensatory care for her infant’s disabilities and allomothering of the infant by its sister might have helped it to survive for 23 months in the wild. Other group members did not show any aversive or fearful reactions to the disabled infant,” researchers conclude.

It’s not extremely uncommon for primates to be born with disabilities. Previously, two other cases of chimps had been observed, both neglected or abandoned by their mothers, and both captive. None of them survived over two years.

Journal Reference: An observation of a severely disabled infant chimpanzee in the wild and her interactions with her mother