It looked rather scary and ugly. Nevertheless, it was an important creature in life's evolutionary history.

Some half a billion years ago, life on Earth underwent one of its biggest turning point in history. This was the Cambrian explosion, a sudden appearance in the fossil record of complex animals with mineralized skeletal remains. It was during this time that the first arthropods with legs and compound eyes appeared, but also worms with feathery gills and swift predators that could crush prey in tooth-rimmed jaws. One such creature, Capinatator praetermissus, a four-inch long marine predator, was recently identified by Yale University and the Royal Ontario Museum as reported in Cell Biology.

“This is the most significant fossil discovery of this group of animals yet made,” said Derek Briggs, a Professor at Yale and curator at the Yale Peabody Museum of Natural History.

Researchers had previously collected about 50 fossil specimens of Capinatator p. from the fossil-rich Burgess Shale in British Columbia, but it was only recently that they fitted all the puzzle pieces together. What they ended up with was a predatory worm called a chaetognath, and this specimen is the biggest chaetognath we’ve found so far, living or fossil.

Even so, it was pretty tiny by today’s standards. Scientists believe Capinatator was the forerunner of today’s smaller chaetognaths which can be found in great abundance throughout the world’s oceans. These creatures make up a significant fraction of the ocean’s plankton and thus represent an important component of the food chain.

A hallmark of Capinatator is a crown of spikes, as many as 50, which adorned its head and served to push prey through the mouth. That’s nearly double the maximum number of spines in today’s chaetognaths.

“This new species was well adapted to capturing prey with the numerous, claw-like spines surrounding its mouth,” said Jean-Bernard Caron, senior curator of invertebrate palaeontology at the Royal Ontario Museum. “Darting from the water depths, the spines would have been a terrifying sight to many of the smallest marine creatures that lived during that time.”

For a glimpse of how Capinatator likely fed, Yale produced the following video. 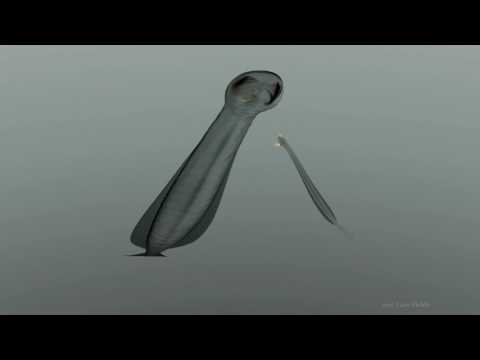 These ancient chaetognath predators were an important component of some of the earliest marine ecosystems. Because their bodies were squishy, it can be very difficult to find reliable fossils but the team made it happen. Now, more than half a billion after since Capinatator roamed the world’s oceans teeming with primitive life, we are fortunate enough to peer inside the Cambrian explosion. With each new specimen, we move closer to finding out how it all begun.