by Alexandra Gerea
in Animals, News
A A

An international team has proved the mental prowess of a critically endangered species: the Hawaiian crow is really good at using tools.

For decades, the New Caledonian crow has baffled scientists with its ability to use tools. This species uses stick tools in the wild by finding small twigs and probing them into holes in logs to extract insects and larvae. They also manufacture tools by breaking twigs off bushes and trimming them to produce functional stick tools. They sometimes also exhibit meta-tool usage – they use tools to create other tools, something which requires very complex cognitive abilities.

These crows were considered an anomaly because no other corvid (crow) species exhibited such a developed intellect. But this new finding paints a completely different perspective.

“The exciting wider context is, if you have only a single species using tools, you’re trying to explain a singularity, and scientifically you’re not really winning with that,” said Christian Rutz, a behavioral ecologist at the University of St. Andrews and the lead author of the study. “But a second species provides leverage for cautiously asking evolutionary questions about how they evolved … and perhaps even to start speculating about the origin of tool use in humans.”

“I think the plot is thickening,” he added.

For over ten years, Rutz studied the New Caledonian crows. He showed that without anyone showing them how, the birds pick up twigs with their beaks and use them to scrape up food, a behavior not exhibited by any other bird species. With over 40 species of crows in nature, they seemed like the likely candidate… but which one? Crow species are generally understudied because most members live in small groups, in threatened or remote communities. Rutz couldn’t really afford to randomly fly and hope for something to happen.

But then, after a decade, he had his Eureka moment: unlike most species, New Caledonian crows have straight beaks. He performed a quick image search and found another species with the same characteristic – the large, all-black Hawaiian crow, known to Hawaiians as the ‘alalā.

The ‘alalā is now sadly extinct in the wild but a last-ditch effort to preserve the species was somewhat successful. A few members still exist, in a breeding program in captivity. Without wasting much time, Rutz called the program manager, Bryce Masuda. It was a strange phone call.

“I said, ‘Look this may sound a bit crazy but I have a hunch your birds may be tool users,'” he recalled. “And the guy replied, ‘oh yeah, they do all sorts of funny things with sticks.'”

That’s when he knew he hit the jackpot. The Hawaiian crows had been using tools all along, but no one really understood – or if they did, they didn’t publish anything about this. Scientists working in the program told Rutz that they “had occasionally seen birds using stick tools at our two breeding facilities, but hadn’t thought much of it.”

After a quick observation period, they confirmed the theory.

“We tested 104 of the 109 ‘Alalā alive at the time, and found that the vast majority of them spontaneously used tools,” says Masuda. Current evidence strongly suggests that tool use is part of the species’ natural behavioural repertoire, rather than being a quirk that arose in captivity, according to Rutz: “Using tools comes naturally to ‘Alalā. These birds had no specific training prior to our study, yet most of them were incredibly skilled at handling stick tools, and even swiftly extracted bait from demanding tasks. In many regards, the ‘Alalā is very similar to the New Caledonian crow, which my team has been studying for over 10 years.”

Because so few ‘alalā survive at all, basically the entire species was studied. Many biologists expressed their compliments.

“Most studies in our field investigate just a handful of subjects, so it is truly mindboggling to see an entire species tested,” comments Professor Thomas Bugnyar, a corvid expert at the University of Vienna, Austria, who was not involved in the study. 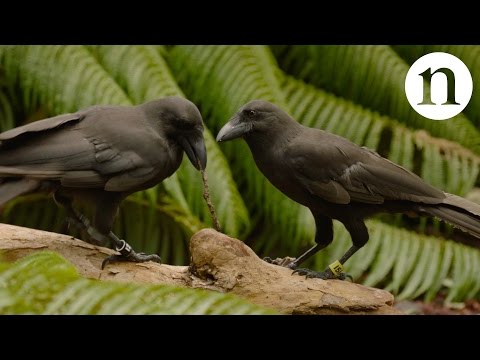 In 1964, world-renowned primatologist, Dr Jane Goodall published a landmark paper in which she provided the first detailed report of tool use in wild chimpanzees. It was the first time a non-human species was shown to use tools. “Now we must redefine tool, redefine Man, or accept chimpanzees as humans,” she said. Two years after that, she also showed that Egyptian vultures use rock tools to open ostrich eggs. She was excited to hear about the new crow study and says we can already draw some comparisons between how primates and birds use tools

“I love learning about the discovery of tool use behaviours in other species of animals. This latest finding is especially wonderful. With two tool-using corvids, the well known Galapagos finches, and one vulture in the list of tool using birds, we can now make comparisons with avian and primate tool using. Each of these discoveries shows how much there is still to learn about animal behaviour, and it makes me re-think about the evolution of tool use in our own earliest ancestors.”

But the story isn’t necessarily a happy-ending one. As we said, the ‘Alalā is critically endangered – it’s extinct in the wild. Its reintroduction might be successful or it might fail, we don’t know. This means that one of the smartest creatures out there might be gone.

“Let this discovery serve to emphasise the importance to conserving these and other animal species so that we can continue to learn ever more about the range of their behaviour before they vanish for ever in the 6th great wave of extinction. We owe it to future generations.”