Meet the fish that can hold its breath underwater

A deep-sea creature is the first fish that we know of that holds its breath underwater.

Although they live underwater, just like us, fish need oxygen to survive. Now, scientists have come across an odd sight: a fish that lives on the bottom of the ocean that can “hold its breath” up to 4 minutes at a time.

Oxygen is one of the things our bodies use to make energy. Humans have evolved lungs to take in oxygen from the air and exhale all the other gases that we don’t actually need, with the addition of carbon dioxide which is a byproduct of respiration. Fish had to find a way to extract oxygen from the water — which is where their gills come in. Gills work like filters that collect the oxygen required for a fish to breathe, which is then sent through the blood to fuel the body.

When you breathe, your chest and lower abdomen puff out and flatten as it lets air in and out. Similarly, a fish gets bigger when it breathes in water and smaller when it lets water out. Fish and other animals with gills are able to extract oxygen because their blood flows through the gills in the opposite direction of water, otherwise, the fish would not have been able to get as much as oxygen from it.

Pull a fish out of the water, and it will quickly suffocate because there’s no water to drive oxygen through the gills. Just like you and other terrestrial creatures would die if we’d be underwater for more than a couple minutes. Luckily we can hold our breath… and so can the coffinfish (Chaunax endeavouri), apparently.

Researchers at the National Oceanic and Atmospheric Administration (NOAA) caught this peculiar behavior on camera by accident. They were using one of their remotely operated submersibles in the Atlantic and Pacific oceans when they recorded at least eight individuals holding large quantities of water in their enormous gill chambers. For minutes, there was no sign of inhaling or exhaling. When the coffinfish finally open their gills, their bodies deflate by up to 30%.

According to the authors of a new study published in the Journal of Fish Biology, the coffinfish may be holding its breath to conserve energy which would have otherwise been used to pump water. ” This holding breath behavior has not been observed in any other fishes and is probably highly energetically efficient,” the authors of the study wrote. Alternatively, the bloated size could help ward off predators. 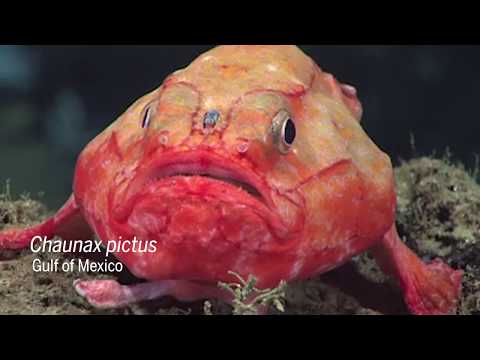