You can name this rescued, one-of-a-kind albino orangutan

She's raising awareness of the plight of all orangutans.

A rare albino orangutan was recently rescued on Borneo Island. She is recovering and seems to be in better condition now. However, orangutans, in general, are critically endangered due to the destruction of forests and illegal hunting. Now the Borneo Orangutan Survival Foundation want to raise awareness about the plight of orangutans by asking for your help to give the recent rescue a name.

The Borneo Orangutan Survival Foundation rescued the 5-year-old female orangutan on April 29th. She was found in Tanggirang village in the Indonesian part of Borneo. Some villagers had held her for two days and claimed that she had wandered out of the forest. Luckily, other villagers reported her capture to the police. Currently, the albino great ape is being looked after by the Foundation. She is kept alone in a shaded enclosure because she is very sensitive to the sun due to her absence of pigmentation. She underwent trauma due to losing her mother and being captured. However, she is eating more and gaining weight now, which is a big improvement from her previously frail condition.

Albino orangutans are very rare, even more so because they have low chances of survival. The spokesman for the Borneo Orangutan Survival Foundation, Nico Hermanu, has said that she likely was only able to survive in the wild because of a protective mother, which she has since become separated from. They are not sure if she can ever be returned the wild. She may have trouble surviving and face threats from other orangutans and humans that might target her for her rarity. Orangutans usually stay with their mothers for a long time, they nurse until they are 4 or 5 years old and still stay with their mothers for another 5 or so years. So this orangutan was prematurely separated from her mother and will lose out on learning important skills on how to survive in the wild.

All orangutans are critically endangered

Orangutans are primates that are closely related to humans. They are the only great ape native to Asia and are found only on the islands of Sumatra (Indonesia) and Borneo (Indonesia, Malaysia, and Brunei). They are the largest tree-dwelling mammals and are known for being gentle and intelligent. Last year, Bornean orangutans (Pongo pygmaeus) were classified as critically endangered by the IUCN mostly because their homes are being destroyed by logging and for plantations. They are also being poached; about 2000 orangutans are illegally killed every year. The other species, Sumatran orangutans (Pongo abelii), are also critically endangered for the same reasons; they have been listed by the IUCN since 2008.

Combining both species, they are about 140,000 orangutans left. This number has dropped by two-thirds since 1970. In the same period, almost 40% of Borneo forests were lost causing lots of orangutan habitat to disappear. The orangutan population is expected to decrease even further to 47,000 by 2025. These great apes have a long lifespan so it takes longer for the population to bounce back.

The Foundation is hoping that the albino will be an emblem for all orangutans by bringing attention to how special they are, but also how endangered. They are raising awareness by letting anyone submit a name idea for her. If you are interested in naming this albino beauty you can send your idea to name@orangutan.org.id or by using the hashtag #albinoorangutan on social media until May 14. The winner will be announced the next day. They want her to have a meaningful name that reflects her condition and that of other orangutans. 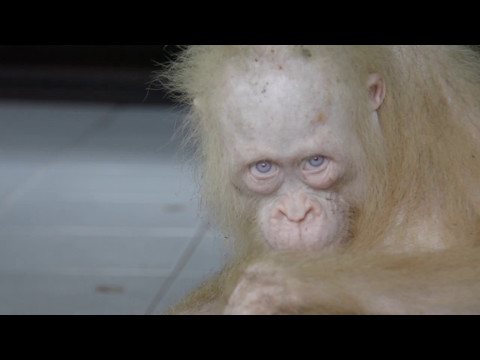