That’s the first word that comes to my mind when I think about the European Space Agency (ESA) mission to Comet 67P/Churyumov-Gersimenko. The Rosetta spacecraft and its lander, Philae, recently reached 67P after a 10-year round-trip journey of four billion miles.

Here’s where the “miracles” come in:

Miracle number one: Mission planners had to calculate a circuitous journey for Rosetta that included four fly-by’s of major planets, which increased its speed enough to reach the comet. Think of a 10-year, four billion mile journey that included zipping past planets and asteroids and culminated in getting close enough to the four-mile- wide comet to go into orbit around it and drop a lander on its surface.

The math and physics involved in rendezvous and proximity operations are daunting. Even though we’ve gotten pretty good at it since the first space rendezvous operations were conducted in the mid-1960s,  it had never been attempted before from this distance or with this oddly-shaped an object.

While 67P is a comparatively small rubble pile in space, it’s massive enough for its gravity to have an effect on both Rosetta and Philae. This means that scientists had to calculate and recalculate its mass and center of mass in real-time from Rosetta as they brought the spacecraft closer to the comet. 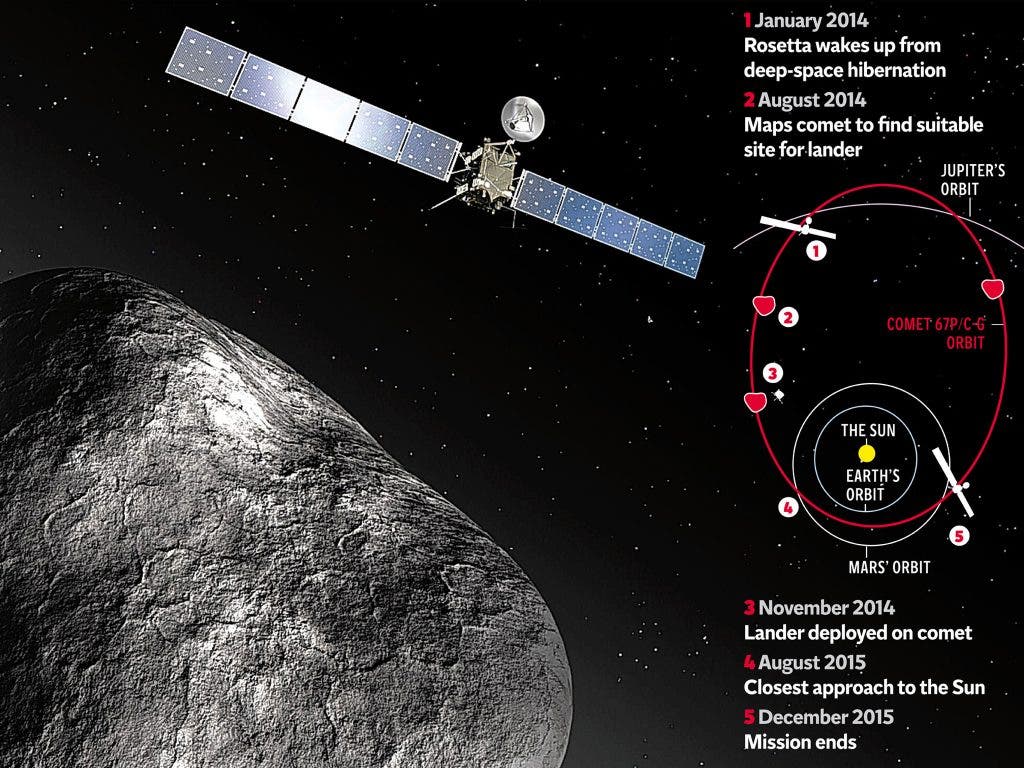 Miracle number two: On June 8, 2011, after Rosetta zipped past asteroids 2867 Steins (September 5, 2008) and 21 Lutetia (July 10, 2010), mission managers put it into hibernation to conserve electrical power. Rosetta flew past the orbit of Jupiter, where sunlight is less than four percent of that on Earth.  For 31 months, it conserved power by not communicating with the Earth at all and generated only enough heat to keep the craft and its instruments from freezing.

Rosetta delivered a tiny amount of electricity to an alarm clock of sorts that roused the spacecraft from its sleep right on schedule on January 20, 2014. The scientists and engineers who were waiting for that signal had to believe that the spacecraft would be exactly where they had calculated it would be and that it would still be in working order.

Miracle number three: Touchdown. Starting in May, mission controllers conducted an intricate set of nine thruster burns that brought Rosetta alongside 67P on August 6.  About 60 miles from 67P, Rosetta fired its thrusters and entered orbit. After that, mission controllers decreased the orbital altitude to a final circular orbit around the asteroid at 12 miles above the surface.

On November 12, the 220-pound Philae lander, which had been attached to Rosetta’s side since launch, separated from Rosetta and descended for seven hours (without propulsion or guidance) and touched down on the surface of 67P. Bear in mind that Rosetta and Comet 67P are hurtling through space at approximately 41,000 miles per hour in an elliptical orbit around the sun.

Kepler’s Laws tell us the orbital velocity is constantly changing and increasing as 67P and Rosetta approach the sun. It’s no exaggeration to say that landing Philae on the surface of 67P was like landing a speeding bullet on another speeding bullet.

The Philae lander landed in the shadow of a cliff.  As a result, the lander’s solar panels aren’t receiving enough of the Sun’s energy, and Philae has powered down. Before it lost power, the lander sent back several exciting images as well as very useful science data. Just before they lost contact with Philae, mission controllers lifted and rotated the lander’s body in an attempt to receive more solar energy. The Rosetta team is confident that when the comet and lander get closer to the Sun, Philae’s solar panels will receive enough energy to allow the lander to power up and continue its mission.

Obviously this accomplishment was not, in fact, a miracle, but the culmination of hard work, expertise, determination, and checking and double-checking. All of this was done by men and women who once sat in undergraduate space studies classes dreaming of someday making a major contribution to science. That’s miraculous and inspiring.

Editor’s note:  Before Philae went offline, it relayed that it had found carbon molecules on the comet’s surface, a discovery with significant implications to the origin of life.

Dave Syndergaard is a professor in the Space Studies program at American Public University. He has over 25 years experience in space engineering, operations, and education. He conducted satellite operations with three different Department of Defense satellites, and worked on engineering teams for satellite communications protocols and Ground-Based Laser Anti-Satellite weapons design. For nine years he taught space science at the National Security Space Institute (NSSI) in Colorado Springs.