"…this nation should commit itself to achieving the goal, before this decade is out, of landing a man on the moon and returning him safely to the earth. " 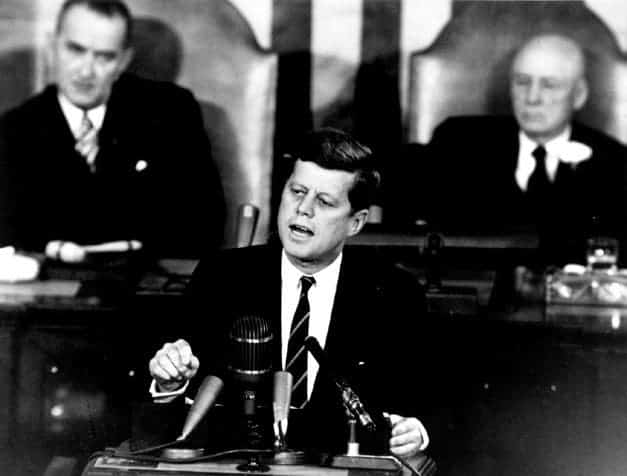 Few presidential speeches capture the imagination of the American public. Even fewer speeches capture the imagination of the world. President John F. Kennedy gave such a speech to the United States Congress on May 25, 1961. That speech initiated arguably the most significant accomplishment in history—landing a man on the Moon and returning him safely to Earth…by the end of the decade!

The Soviet Union launched Sputnik in 1957, catching the United States and the world completely off guard. Then in April 1961, cosmonaut Yuri Gagarin orbited the Earth, becoming the first human in space. The United States became very concerned, realizing that the Soviets now had a huge lead in the Space Race.

President Kennedy was now under increased pressure to not only catch up, but to overtake the Soviet Union in outer space. He decided to act quickly. His speech to Congress marked a turning point for the nation. It energized the United States’ commitment to stretch beyond the boundaries of our planet.

“…this nation should commit itself to achieving the goal, before this decade is out, of landing a man on the moon and returning him safely to the earth. No single space project…will be more impressive to mankind, or more important for the long-range exploration of space.” – President Kennedy, Address to Congress on Urgent National Needs, May 25, 1961

No one knew how the U.S. would accomplish this goal, especially after only one space flight. After consulting with NASA Administrator James Webb, Kennedy concluded that the U.S. had a strong chance of completing this project before the Soviet Union.
An incredibly ambitious endeavor, a flight to the moon involved an enormous amount of both brainpower and money. Kennedy’s speech had a profound effect on Congress. They authorized the president’s request for an additional $7 – 9 billion ($55.5 – $71.5 billion in today’s dollars) for the space program over the next five years.

By 1965, space funding represented 5.5 percent of the federal budget. Today, it is less than .5 percent.

Once Kennedy convinced Congress to support his lofty goal, he had to convince the American public. This undertaking would require the commitment, hard work, and dedication of not just the scientific and space community, but the entire country.

Sixteen months later, Kennedy gave an even more memorable speech at Rice University in Houston. He said: “We choose to go to the moon in this decade and do the other things, not because they are easy, but because they are hard…because that challenge is one we are unwilling to postpone, and one which we intend to win…I regard the decision to shift our efforts in space from low to high gear as among the most important decisions made during my presidency.”

Although Kennedy did not live to see it, America fulfilled his dream. On July 20, 1969, Neil Armstrong stepped onto the lunar surface.

Kennedy’s charisma and skills as an orator may have initiated America’s lunar destiny. His tragic death in 1963 galvanized a grieving nation to fulfill the president’s mandate as a lasting tribute to his memory and legacy.

No president since Kennedy has been willing to stake so much of his political capital on such an ambitious goal, which seemed almost unobtainable at the time. Yet he was confident America could do it.

Would a similar challenge, given today by a U.S. president, be met with the same fervor, excitement and commitment as the one given 55 years ago? Would the result be as remarkable and historic?

In almost 60 years of space launches, humankind has not even scratched the surface of space exploration. Let us continue Kennedy’s dream: “If this capsule history of our progress teaches us anything, it is that man, in his quest for knowledge and progress, is determined and cannot be deterred. The exploration of space will go ahead…and it is one of the great adventures of all time.”

About the Author: Dr. Walt Conrad, PMP, is a faculty member in the Science, Technology, Engineering and Math (STEM) at American Public University, teaching courses in space studies. He holds a D.B.A. in Business Administration from the University of Phoenix, as well as an M.B.A. in Business Administration and an M.A. in Space Systems Management from Webster University. Currently, Walt is a project manager at Science Applications International Corporation (SAIC).