No one has ever studies this before, even though anyone can replicate the experiment in a bathtub. Researchers have developed a water tractor beam for which no mathematical model exists yet.

by Dragos Mitrica
in News, Physics
A A

Physicists have created a groundbreaking water tractor beam technology, which could have very important applications in confining oil spills and manipulating floating objects.

If you’ve ever tried to retrieve a floating ball or some other object while you are swimming, you know how difficult and frustrating it can be sometimes. Well, researchers didn’t set out to improve your beach game experience, but were trying to control water flow patterns with simple wave generators. In the end, they were able to move floating objects at will – basically developing a “water tractor beam”.

“We have figured out a way of creating waves that can force a floating object to move against the direction of the wave,” said Dr Horst Punzmann, from the Research School of Physics and Engineering, who led the project. “No one could have guessed this result,” he said.

They tested the results with a classic table tennis ball floating in a wave tank, and reported that it gave them a unique way of controlling things floating on water. Further experimentation with the ping pong ball revealed the exact frequency and amplitude of the waves required to move the ball in the wanted direction. In the end, they were able to fully control moving the ball towards or against the wave generator – that is moving the ball against the generated waves.

“We found that above a certain height, these complex three-dimensional waves generate flow patterns on the surface of the water,” Professor Shats said. “The tractor beam is just one of the patterns, they can be inward flows, outward flows or vortices.” 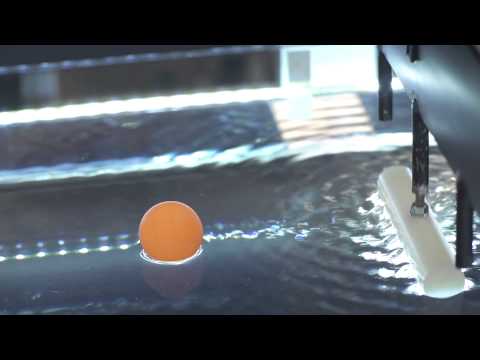 The results were quite surprising – as was the fact that apparently no one studied this in detail before.

“It’s one of the great unresolved problems, yet anyone in the bathtub can reproduce it,” said Punzmann. “We were very surprised no one had described it before.”

The interesting fact is that there is currently no mathematical model to describe this movement. This is the next step in the study- understanding the underlying math.