How many dimensions are there?

According to String Theorists, there are at least 10 dimensions. But there could be as many as 26.

Ask any person on the street how many dimensions are there and, hopefully, they’ll say that there are at least three spatial dimensions (length, width, and depth), with the addition of a temporal dimension (time). Asking a physicist the same question, however, might blow your mind. For instance, theoretical physicists that work in string theory claim the universe is made up of at least 10 spatial dimensions, with the math to back them up.

The three spatial dimensions — length, width, and height (or depth) — are pretty straightforward. With these dimensions, you can pinpoint your exact physical location at any given moment.

One-dimensional (1-D) space can be visualized as a single bead on a thread. You can slide the bead forward or backward, but really all you need is a single value to determine its position in this dimension, which is length. One-dimensional space has no other discernible qualities besides length. In two-dimensional (2-D) space, you need two sets of coordinates to determine the location of a point. It’s like the bead is now in a mesh, where it can slide not only forward and backward but also sideways. Finally, in three-dimensional (3-D) space, depth allows us to slide the bead up and down on a multi-threaded mesh.

Beyond the three dimensions 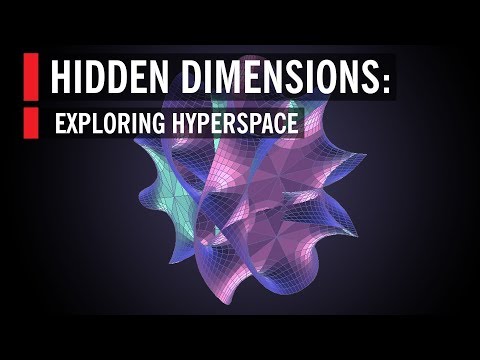 Time is considered to be the fourth dimension. However, it is not a spatial dimension. We need time to locate objects in the observable universe because everything is in motion. In relativistic space, Einstein added time to the three classical dimensions of space. Mathematically, these four dimensions are bound together into what is commonly referred to as spacetime. This was a huge leap of thought that went beyond mathematical formalism. For instance, it is only in such a 4-D model of nature that electromagnetism can be fully and accurately described.

But are there more than three spatial dimensions? That’s a challenging question because our minds are designed to perceive only length, width, and height. Some scientists who subscribe to string theory claim that there’s more to reality than meets our puny mammalian eye.

Our knowledge about the subatomic composition of the universe is summarized in what is known as the Standard Model of particle physics. The Standard Model describes both the fundamental building blocks out of which everything is made and the forces through which these blocks interact. There are twelve basic building blocks that we know of (six quarks and six leptons) and four fundamental forces (gravity, electromagnetism, and the weak and strong nuclear forces). Each fundamental force is produced by fundamental particles that act as carriers of the force. For instance, the photon, which is a particle of light, is the mediator of electromagnetic forces.

The behavior of all of these particles and forces is described with the utmost precision by the Standard Model, with one notable exception: gravity. It’s just proven extremely challenging to describe gravity microscopically. This is one of the most important problems in theoretical physics today — finding a quantum theory of gravity.

String theory attempts to solve this conundrum by unifying two theories that describe how the universe works: general relativity and quantum mechanics. For this reason, it is sometimes called the ‘Theory of Everything.’

Within this theoretical framework, all the fundamental particles of the Standard Model are replaced by one-dimensional objects called strings. Each string corresponds to the four large-scale dimensions of spacetime, which are described by general relativity, plus an extra six ‘compact’ dimensions (one for electromagnetism and five for the nuclear forces).

The reason why we cannot detect these speculative extra dimensions is that these may be too “compact”, in the sense that they may be too small for us to detect them. Conversely, another explanation is that the dimensions are too “large”, which restricts our perspective to a 4-dimensional surface within a higher-dimensional universe or multiverse.

One way to visualize the extra six dimensions is in the form of a Calabi–Yau manifold, in which the extra dimensions curl up around each other, becoming so tiny that they’re extremely hard to detect. These manifolds retain the symmetry between left and right-handed particles and preserve supersymmetry just enough to replicate certain aspects of the Standard Model. There are tens of thousands of possible Calabi-Yau manifolds for six dimensions, and string theory offers no reasonable means of determining which is the right one.

There are various versions of string-theory equations describing 10-dimensional space. However, in the 1990s, a mathematician named Edward Witten at the Institute for Advanced Study in Princeton proposed that String Theory could be simplified if we glanced it from an 11-dimensional perspective. This theory is called the M-Theory. What’s more, according to the Bosonic string theory, there are up to 26 dimensions.

It should also be said that, to date, there is no direct experimental evidence that string theory itself is the correct description of nature. The jury is still out while physicists are having a lot of fun poking into the fabric of reality itself.