This is some scary stuff.

by Contributing Author
in Astronomy, News, Science
Reading Time: 6 mins read
A A
Share on FacebookShare on TwitterSubmit to Reddit

As a result of its magnetic poles reversing position, the sun goes through 11-year solar cycles in activity, appearance and other physical phenomena that have been observed for centuries. It is during these seasonal cycles that solar flares and coronal mass ejections (CMEs) occur. These CMEs spew massive amounts of X-rays, charged particles, and magnetized plasma across the solar system.

According to research scientist Dean Pesnell of NASA’s Goddard Space Flight Center, we are entering a cyclical period when there are few if any sunspots and subsequent solar flares. However, the Sun’s activity should soon be on the rise again, as long as the Sun does not enter a “grand” minimum solar period.

CMEs Can Interfere with Electronic Communication and Navigation Equipment

There are three classifications of CMEs based on the intensity of their emitted x-rays — C-class, M-class and X-class, the highest intensity category. To put this in perspective, one X2 CME on September 6, 2017, caused widespread blackouts and the loss of all electronic communications for up to an hour on the sunlit side of Earth. It also affected navigation equipment for as much as an hour afterward.

This event may not seem significant at first. However, earlier in the final days of October 2003, now known as the “Halloween Events,” there were extreme solar storms and flares so powerful that current detectors were oversaturated. The most powerful CME of that solar storm was classified as an X45. The effects were severe:

An X45 extreme coronal mass ejection has not struck Earth since 1859. During what is known as the Carrington Event, telegraph equipment in the affected area burned up as the result of this CME.

NASA analysts have examined this CME event and estimated that if it occurred today, the damage would be as high as $2 trillion in the first year alone. Full recovery could take between four and 10 years.

Monitoring for Solar Flares and CMEs

Currently, most of our solar flare warnings come from the Solar and Heliospheric Observatory (SOHO), whose mission was recently extended to this December. However, SOHO was primarily designed to study the sun, not to report on solar flares and CMEs. It does only this as a secondary function.

The Solar Terrestrial Relations Observatory (STEREO), launched in October 2006, is another NASA solar observation mission. Two nearly identical observatories, STEREO A and STEREO B — one ahead of Earth in its orbit, the other trailing behind — trace the flow of energy and matter from the sun to Earth. This enables stereoscopic imaging of the sun and solar phenomena such as CMEs.

The STEREO mission has revealed the 3D structure of CMEs. Violent eruptions of matter from the sun can disrupt satellites and power grids, and studying these eruptions helps to understand why they happen.

However, in 2015, contact was lost for several months when the STEREO B spacecraft passed behind the sun. Later analysis of the telemetry concluded that the spacecraft was in an uncontrolled spin too rapid to be corrected. On October 11, 2016, recovery attempts ended.

STEREO A still is operational and collecting data from the sun. However, it is not collecting CME data.

CME Warning Equipment Could Be Stationed at Lagrange Points

There are five points between celestial bodies such as the Earth and the sun, called Lagrange (L) points, where the orbital angular momentum and gravitational forces all balance. That allows objects to be parked there indefinitely. Positioning warning spacecraft at some of these five Lagrange points would optimize the time between CME detection and when the CME would reach the Earth. 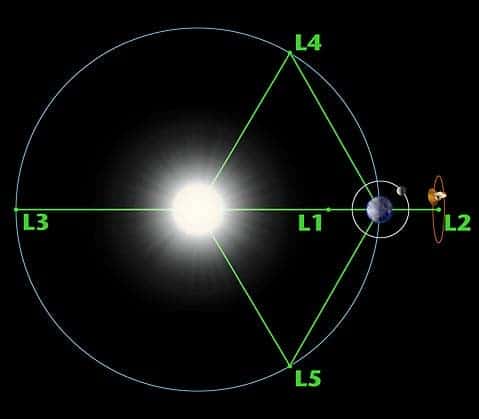 L1, L2, and L3 are all unstable points with precarious equilibrium. Spacecraft must make continual slight adjustments to maintain their positions at these points in space.

L4 and L5, however, are stable, “like a ball in a large bowl,” according to the European Space Agency (ESA). They provide a unique view of streams of charged material heading toward Earth, which allows scientists to better measure the speed of the coronal mass ejections headed toward Earth.

Currently, spacecraft parked at L1 offer only a four- to six-hour warning of a CME. A warning spacecraft parked at L4 or L5 could provide as much as 15 to 17 hours of warning.  However, power-grid operators need at least one full day’s warning to prepare for a Carrington-type coronal mass ejection.

The ESA plans to launch a satellite to L5 in 2023 at the cost of almost half a billion dollars.

The bottom line is that within two years, we will have no operational systems in space watching for coronal mass ejections headed for Earth.

CMEs Are Capable of Widespread Damage

The destruction from a massive Carrington-type CME would be widespread, starting with all satellites in Earth orbit. Various GPS satellites would likely be destroyed or disabled for an unknown period of time.

Also, all navigation systems would be adversely affected. Such a CME could easily inject a trillion-watt current into electrical grids, effectively frying them.

We saw a sample of this damage in 1989 when eastern Canada’s power grid was knocked offline. All airborne aircraft would be at risk from radiation and electronic surges. Also, the International Space Station could be at risk depending on its position at the time of impact. Sewage treatment plants, air conditioning units in buildings and homes, gas station pumps, and media transmissions would all be knocked offline for an undetermined amount of time.

A Carrington-type event today would plunge the affected part of the world into a brief dark era, possibly causing public panic. No one has estimated how many people might come down with radiation poisoning or even die from such a CME impact.

As a result, it behooves the U.S. government, NASA and the ESA to reprioritize their near-term programs to ensure that a solar flare detection system is in place and operational at L5 as soon as possible. After all, $500 million dollars is pocket change compared to $2-plus trillion in estimated damage.

Dr. Stephen Schwalbe is an associate professor at American Military University. He is also an adjunct professor at Columbia College.