Frogs use drains to boost their mating call

by livia rusu
in Animals, Biology
Reading Time: 3 mins read
A A
Share on FacebookShare on TwitterSubmit to Reddit

If you’ve learned during the biology classes in school that the animals are going to adapt no matter the circumstances, your teacher did a great job. Turns out that frogs aren’t the exception to the rule, quite the contrary. New studies show that tree frogs seem to be using city drains in order to amplify the serenades and make their interest during the mating period known. The Mientien tree frog native to Taiwan was found to congregate in roadside storm drain during its mating season.

Moreover, the research showed that the audio recordings were actually relevant to the case in study: the mating songs of the frogs who were inside the structures were louder than their rivals’ who were positioned in patches of land next to the drains. Mark Bee, biologist at the University of Minnesota, declared  that:

‘This is the first study to show that an animal preferentially uses human-made structures to potentially enhance the sounds of its vocal communication signals. These males could be taking advantage of the enhanced acoustics in drainage ditches to outdo their competition. ’ 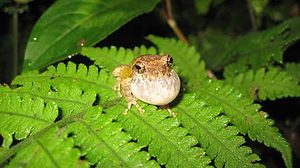 The fact that the voice amplification in frogs is possible has become a scientifically legit fact back decades, and in 2002 some studies suggested that the male Metaphryanella sundana frogs in Borneo use hollow tree cavities in their natural habitats to boost the volume of their mating calls. More recently, after a research held at the National Taiwan University, Kurixalus idiootocus frogs were studied from February to September (during their mating period).

Lekking is the ritual through which the males of the species form groups during the mating season to compete for females with courtship behavior, which, in their particular case, represents singing. The scientific research also showed that the urban tree frogs used open concrete drains along the roads as lek sites, which is completely different from their natural habitat, consisting of ponds where the frogs warble.

As part of the research, 11 plots of 10 meters long and 0.5 m wide were randomly put withing the drains along with an adjacent section of land outside of the gutters (10 meters wide) for monitoring during the night, when the mating songs are most intense. As a result, there were more frogs found in the gutters than in the area. The storm drains were selected much more than any other location, on average 1,64 male frogs per square meter according to the number of frogs found inside the drains, while only 0.02 males per square meter were outside.

The calls from the inside were louder, longer and more effective than the ones outside important selection criteria for the females in most of the frog species, as one of the representatives of the Taiwan University confirmed.

There is no delicacy in the human acoustic perception for these kinds of operations. However, the softwares suggested that the drain calls are about 4 decibels louder inside and the length of all 13 notes that are contained by a frog’s call were 10 per cent longer as well, when the mating call was emitted from the inside.

What the study did not specify is if there was a final result of the male frogs as being more successful because of the placement inside of the drains, but the authors are going to investigate the issue further. One of the other possibilities that Bee identifies for the position on the mating calls is avoiding the predators, which would also explain why the animals jump into man made structures. In order for the study to be fully conclusive, however, all the other hypotheses and theories concerning possible reasons for which the male frogs prefer the urban drains have to be ruled out.