What countries do the most good for the planet? The results are surprising

by Dragos Mitrica
in Anthropology, Environment, News
Reading Time: 3 mins read
A A
Share on FacebookShare on TwitterSubmit to Reddit 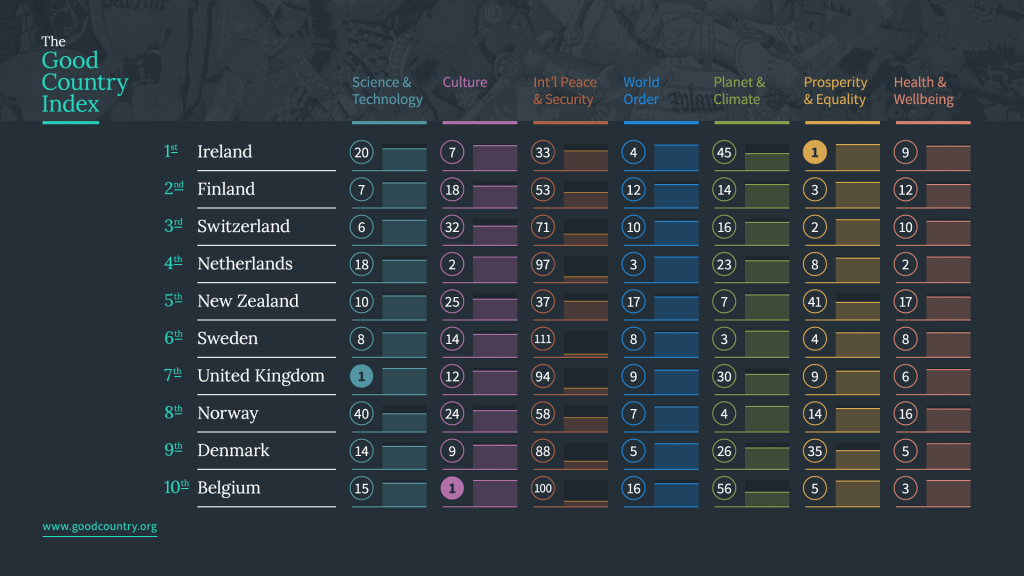 What, Ireland ?! Yep, according to Simon Anholt, who’s spent the past two years compiling an index to determine which of the 125 countries do the most good. Even though it doesn’t really rank that good in terms of security and “greenness”, Ireland takes the top spot, followed closely by Finland, Switzerland, the Netherlands and New Zealand. As a matter of fact, New Zealand is the single non-European country in the top 10. But how does this index work?

“I wanted to know why people admire Country A and not Country B,” Anholt said in a phone interview before he unveiled the full Index at the TEDSalon in Berlin on Monday, June 23. “To cut a long story short, I discovered the thing people most admired is the perception that a country is good. That turned out to be much more important than the perception they’re rich or beautiful or powerful or modern or anything like that. So then I wanted to know which countries are perceived to contribute the most to humanity — and which countries actually are good.”

In case you’re wondering, the US didn’t even make the top 20 – coming in at 21; you can read the whole index here. It’s important to note that the benefits that the countries do are calculated per dollar of GDP, and not for the total GDP.

Of course, when it comes to this type of rankings, there is no absolute order, the idea is to get a general overview – and this does paint a clear picture.

He analyzed 7 main categories: Science and Technology, Culture, International Peace and Security, World Order, Planet and Climate, Prosperity and Equality, Health and Wellbeing. While the overall results seem quite convincing, when you look at the data per category, some things are quite strange.

For example, the first country ranking for International Peace and Security is Egypt. I’m clearly not an expert in sociology, but I’d dare say there are some pretty good reasons why that shouldn’t happen! Nigeria ranks in at 9, with Ghana coming on 12 and Kuwait at 18 – countries which have significant problems when it comes to peace and security. In fact, results for this entire category seem kind of skewed, with less developed countries overwhelmingly taking the first places.

When it comes to health, Spain comes in at 1st place, which is understandable – the Spanish medical system is amazing. The US fares much better at 9, but not nearly as good as Canada (4). Also, for Planet and Climate, Canada is in the second place. Really? Canada?! Canada who’s pumping oil out of tar sands like there’s no tomorrow? Who’s taking away money from environmental researchers who speak against these explorations? I don’t really know…

Still, it’s quite an interesting overall result. Managing this type of ambiguous, rarely fully available data is a gargantuan task – and as years pass, I think we’ll see a more refined index. In the meanwhile, let’s all play our part in making the world a better place.