The way Brooke manages to blend in all this information and make it so damn easy to read is delightful.

by Mihai Andrei
in Books
Reading Time: 4 mins read
A A
Share on FacebookShare on TwitterSubmit to Reddit 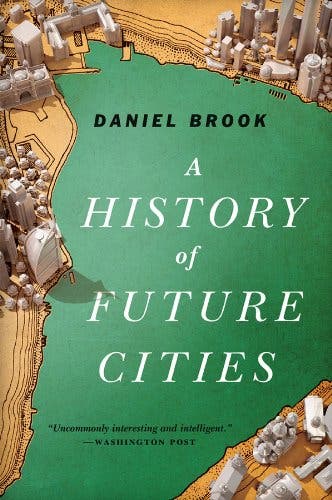 A History of Future Cities is certainly one of the most interesting books I’ve had the pleasure to read lately. Cleverly disguised as a study on four eastern cities (Sankt Petersburg, Mumbai, Shanghai and Dubai), the book is actually a take on human nature, and how the relationship between eastern and western cultures evolved across recent history (about two centuries).

In the final years of the 17th century, a young apprentice from Russia went to the Netherlands to start working at the Dutch East India Company’s shipyards. His employer at the time was one of the biggest companies in the world, with the most advanced ship-building technology. This young Russian apprentice wanted to learn the ways of shipbuilding, and perhaps even more, wanted to learn the social and cultural ways of the West. But this man was more than meets the eye; his name was Pyotr Alexeyevich Romanov, but history remembered him as Peter the Great. Peter spent a year and a half working undercover in the Netherlands, and then came back in Russia with one dream: to create a new capital for the Russian empire, a capital that would mirror Amsterdam but eventually surpass it, becoming the greatest city in the world. Thus, Sankt Petersburg was born, literally from the ground. Peter wanted to copy the ways of the west before surpassing them – he wanted the best of both worlds – and for a while, Sankt Petersburg became the shining pearl of Europe. There, Eastern culture clashed with the west, leading to monumental achievements, wondrous works of art, a vibrant society, and ultimately – violence and bloodshed.

Though the stage was different, Shanghai and Mumbai followed a curiously similar trajectory. While Shanghai is still a thriving city, it is tightly monitored, controlled and censored. Workers are still trying to find decent conditions to live in, and the memory of foreign domination still burns the city’s mentality. While there is no longer bloodshed in the Chinese city, freedom is not really a word you’d use either. Meanwhile, Mombai is still trying to find its identity, trapped between former colonial glory, national values and a concrete present. Both emulated western culture at one time, both tried to get rid of it, and both haven’t truly broken free from their vestigial past.

Dubai is a new city, with its story just starting to unfold. The city’s development was enabled by an apparently small development – air conditioning. Dubai is currently the world’s most lavish city, with ambitions to become a major powerhouse of the modern world. But is the city actually built sustainably, or is it just a castle made of sand? Time will tell, but there are arguments for both possibilities.

All these four cities, as different and far away as they are, have one thing in common. All of them wanted to learn from and ultimately surpass western civilization. All of them were dominated by another civilization, broke free from it… but never actually broke free. Their road was full of challenges, and their objective still not reached. The dream is not over, but it seems to slip from grasp.

The book is enjoyable on many levels. For the history buffs, there’s plenty of gems here. Many pieces of history and behind-the-scenes stories are absolutely delightful, and never being very passionate about history, I found myself wanting to find out more and more and ended up looking for more details on the internet. For psychologists and sociologists, this is also a gold mine – and what makes even better is that it provides all this valuable information while also being very pleasant to read.

At one point, the book claims to be a work on city planning – and this is definitely true, to some point. It provides accurate information about how the cities were built, the key elements and the issues associated with them. But the book takes things one step further: instead of focusing solely on the cities, he addresses the people behind them, and this is where I feel the book’s beauty lies. I felt that this wasn’t a book about cities, but rather a book about the people who build the cities; the mix of different cultures, the struggles that comes with greatness, and above all, about building a brave new world.

I would recommend this book to anyone, regardless of background. The way Brooke manages to blend in all this information and make it so damn easy to read is delightful. A real treat, and a definite contestant for that special place on the nightstand.