by Alexandra Gerea
in Offbeat
Reading Time: 2 mins read
A A
Share on FacebookShare on TwitterSubmit to Reddit

These are sad times indeed when officials have to issue warnings telling people not to shoot at hurricanes. 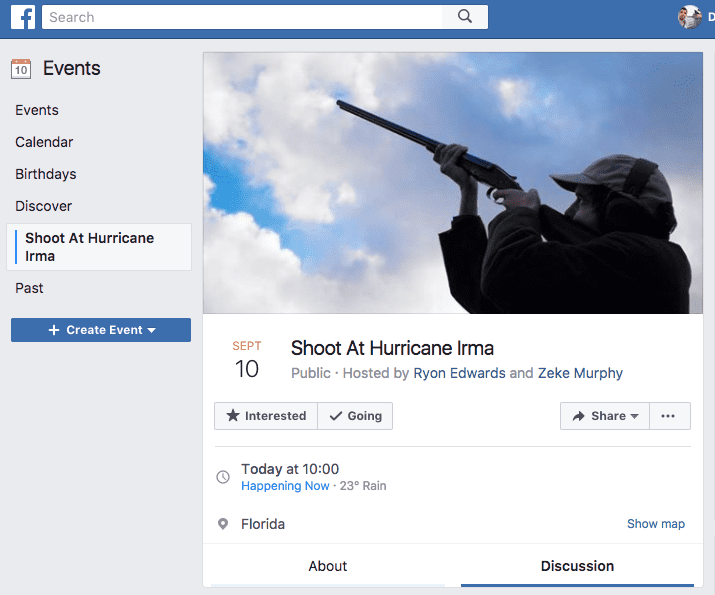 It’s amazing what a viral Facebook post can do, no matter how crazy (or sarcastic) it is. “LETS SHOW IRMA THAT WE SHOOT FIRST,” the post from a 22-year-old man said. His post went so popular that over 27,000 people said they would attend the “Shoot Hurricane Irma” event, prompting authorities to issue a warning against “shooting your gun at Irma”. The official tweet went on:

To clarify, DO NOT shoot weapons @ #Irma. You won't make it turn around & it will have very dangerous side effectshttps://t.co/CV4Y9OJknv

Thankfully, there were no incidents associated with the event.

“There we no actual shots fired. We don’t know if the individual was joking, or making a serious threat,” said Pasco County Sheriff’s Office spokesman Doug Tobin. “We’re just responding to citizens in general, making sure no one shoots weapons in the air. The bullet trajectory could come down and hurt individuals.”

Of course, at first it wasn’t clear whether or not the individual was joking, but the event took a life of its own, and the sarcasm became evident. To underline this, in a later update, the author said that “about 50% of the world could not understand sarcasm to save their lives.” This seems to fall well within Poe’s Law, an internet adage which states that “without a clear indicator of the author’s intent, it is impossible to create a parody of extreme views so obviously exaggerated that it cannot be mistaken by some readers or viewers as a sincere expression.” Often times, parodies seem like genuine extreme views.

But even stories started as jokes can be very dangerous.

Even though the majority of people may be in on the joke, a few might be not. I wouldn’t put it beyond people to get their guns and shoot at the hurricane; after all, this is a country that elected Trump as president largely due to false news which propagated virally across social media.

Needless to say, shooting your weapon at a hurricane won’t actually do anything. It will put you, and potentially others, at significant risk. The fact that authorities even have to step in and issue this warning is disheartening. For proper information on hurricane preparedness, check out the portals from Ready.gov and NOAA.