What is this sorcery? Why, magnets of course, and two Norwegian students have found a way to make magnetism more entertaining than ever.

What is this sorcery? Why, magnets of course, and three Norwegian students have found a way to make magnetism more entertaining than ever. It all started three years ago when Tobias Linkjendal and Juul Arthur Ribe Rudihagen, both attending Norwegian University of Science and Technology, started fiddling around with coin magnets they bought from an online store. Since they were so versatile, the two found they could invent their own games like magnetic curling where they’d use magnetic force to shoot the magnets and push opponent away. Soon after, Hanna Agersborg Aanjesen joined the team and it became clear they were on to something. Fast forward today, when Magination was born: a set of magnetic pieces in various shapes, sizes and colours. It’s very simple, but highly creative and entertaining. It’s black magic LEGO!

Magination is still in its prototype phase. The pieces are made from injection-molded plastic encasing the neodymium magnets, while previous versions were 3D-printed. Each has a coin-shaped magnetic with the poles on the flat side (axially magnetized) and come in three varieties:  Single, Double and Triple. “When you put these pieces flat down on a surface, they will simulate how monopoles would work in a 2D space; attracting or repelling in all directions depending on which poles that point up,” Linkjendal told me.

Depending on how the magnets are aligned, these will repel or attract each other, causing the pieces to stack or, oppositely, push apart – sometimes in a spectacular fashion, like we can see in some of these animated GIFs.

“Magnetic poles are distinguishable with a circular marking on the south side and blank on the north side. This introduce basic magnetism where difference attract and similarity repel, which is also something we aim towards; being educational in a creative and experimental way! Because magnetism is a fascinating force, you will always end up experimenting, where the possibility of unlocking new ways to use the pieces happens. New features can become new rules and games, where players from all around the world can put their heads together in a continuous development of Magination,” said  Linkjendal for ZME Science. 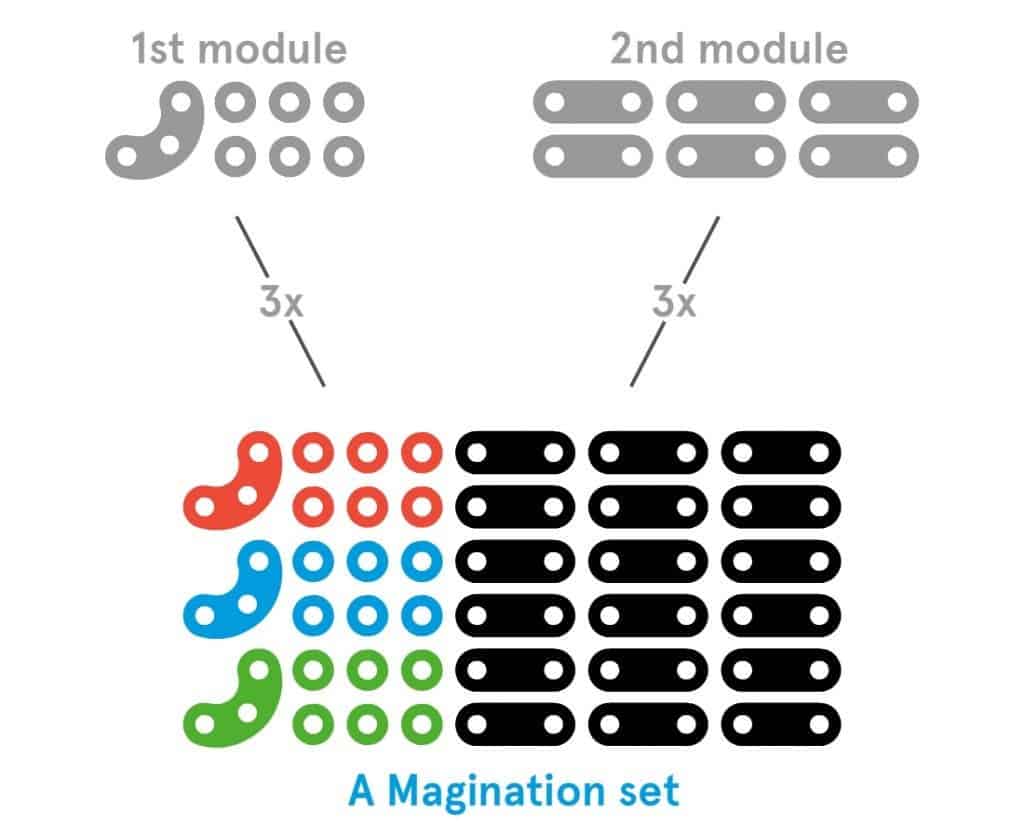 A set is made up of multiples of two modules. The first module consists of a Triple and six Singles, which are coloured differently, while the second module is comprises six all-black Doubles.

Magination is akin to a deck of cards, since you use the same elements to play different games – maybe even more versatile.

“You can also find diversity between the same games in a deck of cards where some might play with a different card face as the trump card. This diversity doesn’t really bring something new to the gameplay, but with Magination, that’s a different story. Players might use modified shooting devices or include new ways to use the pieces that they discovered themselves or on the online community, where the new player learns a new way to use their pieces, and can choose to include this or not when they play with others. Diversity in Magination games can actually bring something new to the table, each time you play it,”  Linkjendal  said.

Ok, ok. I know what you’re thinking, “Shut up and take my money!”. Magination is not there yet. The Norwegian startup is still raising cash, and on November 19th they’ll launch a KickStarter campaign where you can pitch in, support this project and be among the first to get a Magination set.  Subscribe to find out when the campaign goes live. Linkjendal says they hope to raise $10,000 to start production.