To preserve its environment for future generations, Barbados has adopted sustainability in five ways.

This is a guest post by Ariana Marshall, Ph.D., Faculty Member, APU School of STEM and Caribbean Sustainability Collective Director.

Every year, the island of Barbados – a small island of only 166 square miles – demonstrates its expertise in environmental sustainability when it comes to summer fun for the Crop Over Festival.

Barbados is in a very precarious environmental situation. The island is 18 times more densely populated per square mile than the U.S. One-quarter of a million people live on the island. In addition, many visitors descend on the island for the festival, drawn to the entertainment provided by the festival and the potential opportunity to meet pop singer Rihanna, a native of Barbados.

To make things worse, natural resources on Barbados are limited. For example, water in Barbados is scarce; there are no significant rivers or lakes to provide fresh water so it is pumped upward from underground sources. Electrical power is expensive, with power costing more than other areas in the Caribbean region. This lack of power raises the cost of doing business on Barbados.

To offset its lack of resources, the Barbados government also recently entertained the idea of a constructing a facility to convert waste to energy. The project met public opposition and Barbados continues to look for alternate waste management solutions.

The Crop Over Festival provides a grand opportunity for Barbados to lead the way in making this festival environmentally sustainable. Since 2014, some news sources even think this tiny island is beating the U.S. on the road to green energy.

Sustainability is definitely in the island’s best interest, with climate change affecting Barbados rain patterns and causing temperatures and seas to rise. To preserve its environment for future generations, Barbados has adopted sustainability in five ways.

Consumers in Barbados have saved money with solar technology since the 1970s. The island has the 5th highest number of solar water heaters per capita, which has saved Barbadians 130 million in U.S. dollars over the decades.

Barbados also has one of the only solar-powered desalination plants in the region. In time, this plant will be increasingly important as it only provides 30% of the island’s water needs.

Over 2,500 homes have already installed solar power. Local renewable energy companies such as Williams Solar see the opportunity in installing for both small and large businesses, so that no one is left behind in a sun-powered revolution.

In addition, 100% off-grid renewable energy entertainment events may be a thing soon in Barbados. Crop Over event organizers have reduced energy costs by hosting solar-powered day parties as opposed to electricity-guzzling night events.

Energy-saving LEDs bring a return on investment to householders and businesses within two months and the Barbadian government has recognized these savings. In a Barbadian partnership with the Inter-American Development Bank, several projects gave rebates to householders using energy-efficient products such as LEDs.

The local government has recently replaced street lighting with LEDs at Crop Over venues, such as the Spring Garden Highway where the street party for Kadooment Day ends.

Reusing waste for crafts is nothing new to the island. If you drive through Barbadian communities, you will see how homeowners embellish their gardens with PET bottles. What is new is how large volumes of waste are managed more efficiently through corporate social responsibility with a green twist.

For Crop Over 2016, the Barbadians explored this green twist in a fitting way because Caribbean alcohol brands heavily depend on the festival to engage their target audiences. Pioneers in the rum industry and five entertainment companies reduced their plastic waste impact on the Barbados landfill by using biodegradable foodware and recycled plastic at Crop Over events in partnership with the Better Caribbean Program.

But recycling plastic bottles is not enough. Event organizers have gone up another level of sustainability to stand out from their competition and gain partygoer attention.

By using 40-foot containers hoisted by cranes and derelict cars that are normally considered industrial waste, entertainment company Elevate Entertainment brought another dimension to its events.

The industrial look created unique marketing opportunities for various brands. Heineken has an established global environmental sustainability commitment. But when their logo was projected on a 40-foot container, that conveyed a powerful message about Heineken’s commitment to the environment and spoke volumes in a dialect understood best locally: “Waste not, want not and BRING DRINKS!”

In the Caribbean, patrons prefer to have alcohol companies spend their marketing budget on spectacular drink deals, rather than glitzy branding gimmicks.

Even the children are involved in recycling efforts. Bands participating in the children’s version of the street parade – Junior Kadooment – use recycled materials for costumes.

These bands have reinvented the concept of robots to do good recycling deeds. Quimby’s Youth Explosion Band transformed their “Environmental Super Heroes” theme to include Lex Pollu-thor and the Green Footprint. These costumes double as both environmental education for onlookers and self-esteem builders for children who want environmentally aware friends. This environmental awareness is a promising sign for the future of Barbados. 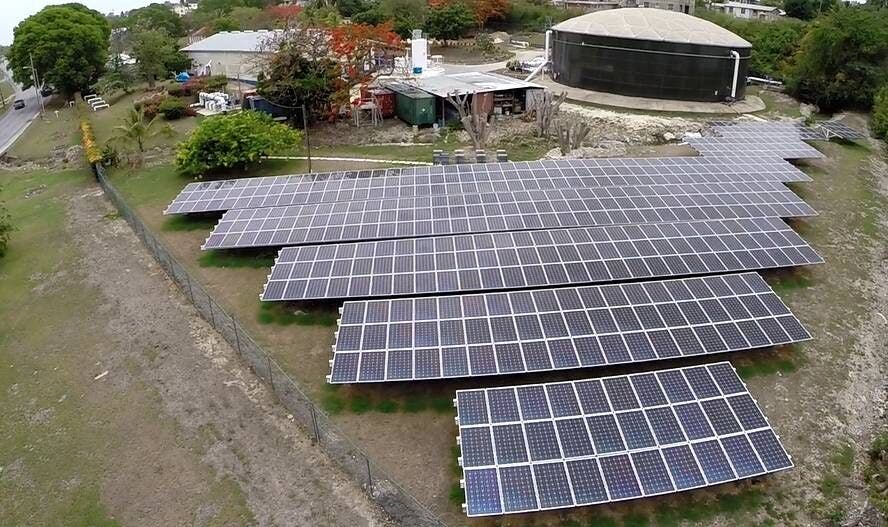 Businesses of all sizes and types are integrating environmental sustainability into their operations and products. The Future Center Trust and the Inter-American Development Bank Multilateral Investment Fund have certified Caribbean businesses as “green” businesses. International festival exhibitors display their commitment to being “green” and environmental preservation supporters create educational campaigns about sustainability.

In the Caribbean, radio is one of the most effective forms of public engagement. This engagement is not limited to the Caribbean region. Caribbean nationals worldwide use online streaming of radio stations to stay connected to the pulse of the Caribbean region, whether that’s through music or the issues raised on call-in programs. Maintaining that connection helps Barbadians to channel external resources toward solving issues that the Caribbean cannot face alone.

Because deejays and radio announcers frequently hear complaints about the island’s environmental issues on these call-in shows, some of them have become well versed in elevating those issues nationally. This elevation also results in the resolution of basic environmental issues related to waste management or the population density pressures on the Barbados infrastructure. This culturally relevant public engagement provides Barbados with alternative ways to solve environmental issues.

All in all, Barbados is working hard on resolving its environmental issues and creating sustainability that is urgently needed. For every other island in the Caribbean region and beyond, how Barbados manages a passion for partying, the traditions of the Crop Over festival and the island’s economy serves as a unique example of how culture, sustainability and entertainment can create solutions that are effectively bound to the social fabric of a country.