Brain scans show the cause of the winter blues

by livia rusu
in Mind & Brain, News
Reading Time: 4 mins read
A A
Share on FacebookShare on TwitterSubmit to Reddit

Scientists have found the reason why we get the winter blues, or as it is scientifically called, the seasonal affective disorder (SAD). 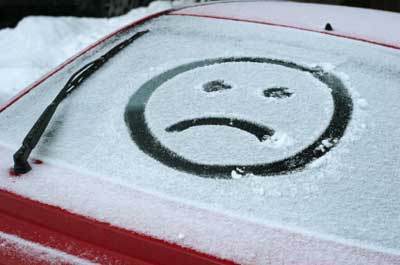 Initially, seasonal affective disorder was considered a unique mood disorder, but its status was changed, as it has a strong seasonal component. Although many researchers initially didn’t even admit the “winter blues” as a medical problem, now this condition is now recognized as a common disorder, with its prevalence in the U.S. ranging up to 9.7% in New Hampshire. SAD is described by the U.S. National Library of Medicine as follows:

“Some people experience a serious mood change when the seasons change. They may sleep too much, have little energy, and may also feel depressed. Though symptoms can be severe, they usually clear up.”

So after admitting its medical existence, the next logical step is figuring out how and why it happens. What they initially found is that as the nights draw longer and longer, the brain production of a transporter protein ramps up, lowering available serotonin; at least this is the general theory at the moment. Serotonin is popularly thought to be a contributor to feelings of well-being and happiness – if its levels are lowered, the overall mood tends to go down as well. The work will be presented this week at a neuropsychopharmacology conference.

“We believe that we have found the dial the brain turns when it has to adjust serotonin to the changing seasons.”

“The serotonin transporter (SERT) carries serotonin back into the nerve cells where it is not active – so the higher the SERT activity, the lower the activity of serotonin. Sunlight keeps this setting naturally low, but when the nights grow longer during the autumn, the SERT levels increase, resulting in diminishing active serotonin levels. Many individuals are not really affected by Sad, and we have found that these people don’t have this increase in SERT activity, so their active serotonin levels remain high throughout the winter.”

Prof Siegfried Kasper, of the European College of Neuropsychophar­macology, who was not involved in the study, said:

There are many different treatments for classic (winter-based) seasonal affective disorder – the most common tip is to just stay in places with lots of light; in rare cases, doctors recommend antidepressant medication, cognitive-behavioral therapy, ionized-air administration, and carefully timed supplementation of the hormone melatonin.

“We know that eating a balanced diet, cutting down on caffeine and getting some exercise can help, as can spending as much time as possible outdoors because – even when it’s overcast – light will be higher than indoors.”

It’s estimated that about two million people in the UK, and more than 12 million people across northern Europe alone suffer from SAD. Around 20% of Irish people are affected by SAD, according to a survey conducted in 2007. Interestingly enough, winter depression was first described in by the 6th century Goth scholar Jordanes in his Getica wherein he described the inhabitants of Scandza (Scandinavia). Iceland, however, seems to be an exception. A study of more than 2000 people there found the prevalence of seasonal affective disorder and seasonal changes in anxiety and depression to be unexpectedly low in both sexes. It’s not clear why the winter blues avoids Icelandic people, but study authors believe there is a genetic underlying cause, rather than an environmental or lifestyle cause.