Magazines in Waiting Rooms are Old Because People Steal New Ones, Science Shows

by livia rusu
in Mind & Brain, News
Reading Time: 3 mins read
A A
Share on FacebookShare on TwitterSubmit to Reddit

You see them at the dentist, at the vet, the hair salon – the old magazines on the table. Fashion magazines, car magazines, travel magazines, whatever… they all have one thing in common – they’re really old. Why don’t practitioners just put new magazines? A new study has now shown that they really do… but people just steal them. 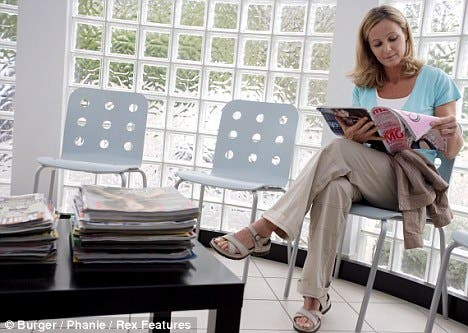 It’s not your usual study, that’s for sure, but no one can say that it doesn’t have practical implications. A team of New Zealand researchers set up to find why the magazines in waiting rooms are usually so old.

It all started when Bruce Arroll, a professor at the University of Auckland heard many complaints regarding the lack of up to date magazines in the waiting room of his general practice. The number of complaints was so large, that it raised some big question marks for him. He set out to research the literature and find out if there are any studies quantifying this… but he didn’t find anything. There was no research documenting the absence of new gossipy magazines from waiting rooms – so he set out to investigate that.

“We defined a gossipy magazine as one that had five or more photographs of celebrities on the front cover and a most gossipy magazine as one that had up to 10 such images. The Economist and Time magazine were deemed to be non-gossipy. The rest of the magazines did not meet the gossipy threshold as they specialised in, for example, health, the outdoors, the home, and fashion. Practice staff placed 87 magazines in three piles in the waiting room and removed non-study magazines. To blind potential human vectors to the study, BA marked a unique number on the back cover of each magazine. Twice a week the principal investigator arrived at work 30 minutes early to record missing magazines.”

The results were pretty clear: after just one month, half (47%) of 87 magazines left in a general practice waiting room in Auckland, New Zealand, had disappeared, with newer magazines being much more likely to go missing than older ones. The limitation of the study is that it was conducted on a single clinic in New Zealand, so things may be different in other areas of the world.

I really hope this study will be replicated in other parts of the world, because results are quite interesting. Researchers humorously conclude:

“Although we believe our study to be the first to rigorously examine the phenomenon of disappearing magazines from practice waiting rooms, we have to acknowledge Pulitzer Prize winner and humourist Hal Boyle who wrote on this very topic 44 years ago. He began by stating that patients are responsible for the disappearance of new magazines; however, his “research” concluded that practitioners choose magazines that are between 20 and 50 years old so as not to be caught out by patients asking about new procedures or drugs that are recommended in those magazines.”