Boy born without ears has a pair made from his ribs

by livia rusu
in Anatomy, News
Reading Time: 2 mins read
A A
Share on FacebookShare on TwitterSubmit to Reddit

Nine-year-old Kieran Sorkin was born without ears, but now, doctors made him a pair of ears from his own ribs. 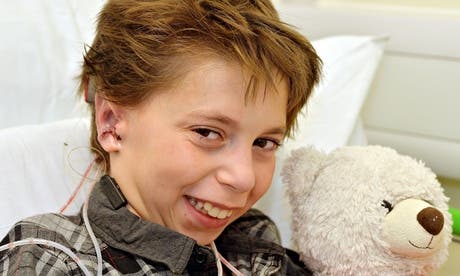 Kieran suffered from a rare condition in which his ears didn’t fully form – he had just small lobes where his ears should have been. He was almost deaf, but thanks to several previous procedures, his hearing slowly started to function, especially when using a hearing aid. Now, this surgery was mostly cosmetic, but it was a spectacular one.

“I’ve always wanted big ears, and now I’m finally going to have them.”, he said. Following the procedure his parents helped him to take a photograph of his newly crafted ear, or a “side selfie”.

His parents were extremely excited about the results, saying that they were “on cloud nine” after the procedure.

“We could not have wished for a better result,” Sorkin said.

Medics, led by Neil Bulstrode, GOSH consultant plastic and reconstructive surgeon harvested the rib cartilage from both sides of Kieran’s chest and then carved and shaped it into frameworks for Kieran’s ears. They used his parents to serve as an “ear template”, making his new ears as close as possible to what his natural ones would had been. They then grafted the ears on to Kieran’s head under pockets of skin and used a vacuum to shape them.

“Bilateral reconstructions are sometimes done one at a time, but for Kieran we have created both of his new ears at the same time,” Bulstrode said. “This allows us to ensure the ears are balanced and achieve the best result. It’s a major operation but it brings a significant improvement in quality of life for children with microtia. Their confidence improves exponentially and their performance at school improves,” he said. “If you can improve a young person’s confidence, you can alter their whole trajectory in life.”

Kieran will have another surgery after 6 months, to fix things, but if everything works out fine, then he won’t need any additional procedures.