by Ron Miksha
in Environment, Environmental Issues, Pollution, World Problems
Reading Time: 6 mins read
A A
Share on FacebookShare on TwitterSubmit to Reddit

Raw human sewage isn’t in the news often enough. But infrastructure repair in Montreal has given sewage world attention.  Starting Wednesday night, Montreal began dumping 8 billion litres of raw toilet flushings, garburator grindings, and shower stall drippings into the St. Lawrence River. The mayor says they had to do it. It’s not such a big deal. The sewage, which will by-pass treatment for one week, may even bring fresh nutrients to the beautiful river’s fish, flora, and fauna. Or maybe it will kill them.

Montreal.  Eventually every city must do it. Upgrade its infrastructure, that is. (Credit: Wiki)

Montreal’s raw sewage dump is temporary. When the story caught international attention, Montreal Mayor Denis Coderre grew impatient with questions from American reporters. At a news conference  on Thursday, he suggested to American reporters that it might be “appropriate to take a look at some cities in the United States before talking against Montreal.”  Indeed. But American cities generally score well on sewage treatment. Unlike Canada, the USA has a national policy on sewage standards and it’s enforced (more or less) by the country’s Environmental Protection Agency. Two Canadian provincial capitals – Halifax and Victoria – dumped all their effluent directly into the ocean for centuries. In 2008, Halifax ended 250 years of ocean dumping, built a proper treatment plant, and then opened beaches to swimming.  Victoria – one of the loveliest cities in the world – still dumps raw. Canada’s biggest city, Toronto, handles its sewage well, except when it rains. Then, the wastes of its 3 million people swamp Toronto’s treatment plants. The excess flows directly into Lake Ontario.

A hundred years ago, the United States was lauded for its fine sewage system. By the 1940s, 80% of its city water was treated. Rural areas enjoyed a mix of efficient septic tanks and cesspools that handled wastes with dignity. But in recent years, American infrastructure has suffered budget cuts and things are beginning to leak and wreak. Many systems in the States have gone a hundred years without major repairs. Most recent USA sewage spills have been in the mere millions (not billions) of litres and have generally involved ruptured pipes (Pennsylvania) or tanks overflows (California).  But without infrastructure investment, a big spill is inevitable.

Even when wastewater is treated in modern sewage plants, the refreshed fluid contains a host of ugly modern chemicals – including pharmaceuticals, along with grit and grizz of all sorts.  A 2012 study by the United States Geological Survey working in Iowa found that treated wastewater went from streams to groundwater, carrying biologically active carbamazepine, sulfamethoxazole, and immunologically-related compounds. These biotics joined other known contaminants flowing from cleansed effluent. Other contaminants may include heavy metals, phthalates that mimic hormones, and industrial chemicals. Even when sewage is properly scrubbed, some chemicals evade removal. Arguably, those invisible chemicals smell OK, but are far more dangerous to the environment than highly noticeable human droppings.

Port-au-Prince – a city the size of Toronto – is one of the world’s largest cities without a sewage system. Most of the city’s raw waste runs through streets, into streams, rivers, and finally the sea. You’d think this could lead to disease. It does. Cholera erupted after the 2010 earthquake and has led to 9,000 deaths.  Brigades of Haitians are employed by the city to scoop cholera-infested waste into buckets. Every night, those bayakou crawl into latrine pits and pull out human waste. They dump it into the ditches and canals which ooze along with the day’s garbage, reaching Port-au-Prince Bay within a few days. In recent decades, the percentage of untreated sewage in Haiti has actually increased – it’s now just 17%. In 1990, 26% of wastewater was treated.

Other cities, such as Peru’s capital, have efficient collection systems, but sewage from the city’s 10 million people is untreated. It’s dumped directly into the Pacific. In Lima, I went to a pleasant beach where families splashed in the green water. I didn’t wade in the water – it looked much too green. And stuff was floating in it. I saw something similar in Vietnam’s capital, Hanoi. In the heart of the city, iconic lake Hoàn Kiếm with Turtle Tower on its small center island was awash in waste when was there.  Another big developing city, Rio de Janeiro, is trying to clean up its open sewers ahead of the 2016 Olympics. 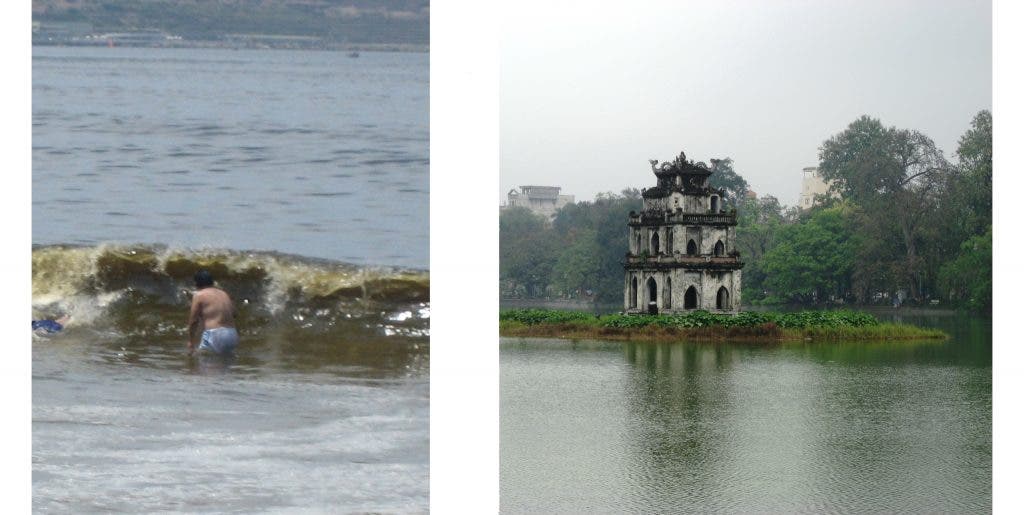 Lima, Peru, left and Hanoi, Vietnam, right: Two beautiful cities that could use a bit of infrastructure. (Photos: Miksha)

Meanwhile, the city of Montreal is quickly – very quickly – fixing its infrastructure. In a few days, treated water will again flow into the St. Lawrence River. Until then, 8 billion litres of raw sewage will merge into the river’s flow. That’s 12,000 litres every second. However, each second 7,500,000 litres of clean water flow past Montreal. Merging in the sewage means mixing in one-tenth of one percent into the other 99.9% river water. The fish will hardly notice, except for the parts that are synthetic hormones, heavy metals, and microscopic carcinogens from plastics and industrially produced food scraps. But that stuff is in every city’s wastewater – even after sewage treatment.

Actually, it’s not that bad. (French inscription might be on the sign’s reverse side.)