Between 30 percent and 90 percent of honeybee hives disappeared virtually overnight.

by American Public University
in Animals, Environment
Reading Time: 6 mins read
A A
Share on FacebookShare on TwitterSubmit to Reddit 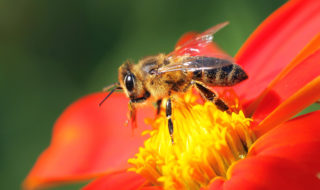 During the winter of 2006-2007, beekeepers around the country began reporting unusually high losses of their hives. Between 30 percent and 90 percent of honeybee hives disappeared virtually overnight.

As the Environmental Protection Agency (EPA) reported, a majority of worker bees in a colony would suddenly “disappear leaving behind a queen, plenty of food and a few nurse bees to care for the remaining immature bees and the queen.”

The strange occurrences had all the eerie mystery of a Wes Craven horror film, except it was insects that were dying, not people.

“As many as 50 percent of all affected colonies demonstrated symptoms inconsistent with any known causes of honeybee death,” the EPA said.

The widespread mysterious disease was labeled Colony Collapse Disorder (CCD) for want of a more precise term. Fears grew that this was a dire omen — honeybees would become extinct and with them, the flowers and plants that rely on bees for pollination and procreation.

As the Agricultural Research Service explained, “About one mouthful in three in our diet directly or indirectly benefits from honeybee pollination. Commercial production of many high-value and specialty crops like almonds and other tree nuts, berries, fruits, and vegetables depend on pollination by honeybees. These are the foods that give our diet diversity, color and, flavor.”

Without honeybees, we would be bereft of much of our vegetation, creating even more malnutrition and starvation in the world.

Cause of Colony Collapse Disorder Still a Mystery

There have been many theories about the cause of CCD, including the frequency in recent years of hurricanes, tornadoes, wildfires, and smoke, and of course climate change. According to an online article in Vox citing the National Climate Assessment, average annual rainfall across the U.S. has gone up by five percent since 1990. These natural disasters may have upset the bees enough to cause them to flee their hives.

The EPA, however, has focused on the following factors that could contribute to CCD:

Declines in Bee Populations Have Occurred throughout History

Like much media reporting today, the truth about CCD is quite different than the Doomsday scenarios. According to Norm Benson of Science 2.0, sudden declines in bee populations are nothing new. They can be traced back to Ireland in 950 AD and recurred again in 992 and 1493.

“In 1853, Lorenzo Langstroth, the father of American beekeeping, described colonies that were found ‘to be utterly deserted,’” Benson reported. “The comb was empty, and the only symptom of life was the poor queen herself.” He also noted, “In 1891 and 1896, many bees vanished or dwindled to tiny clusters with queens in the month of May, hence the name: ‘May Disease.’”

Why the Public Should Know about Colony Collapse Disorder

Entomologists, however, can see some benefit to calling the public’s attention to insect population declines such as Colony Collapse Disorder.

Writing in The Washington Post, Michael S. Engel, a paleontologist and entomologist at the University of Kansas, warned of the danger of singling out one group of organisms, such as honeybees, when discussing their impact on “the broader economy of nature.”

“Among all of life’s creatures, insects are some of the most vital, whether we notice their many services or not,” Engel pointed out. Just by “their staggering diversity and vast ecological connectedness,” insects are a fundamental, indelible part of virtually every ecosystem.

“Beyond pollination services, insects are also the food of many birds, mammals and fish,” Engel said. “Without insects, all of these would perish. Insects underpin, often unseen and ignored, the essential processes of our world.”

Bees Are Not Going Extinct and Crops Are Not in Trouble

Last year, Jon Entine, founder and executive director of the Genetic Literacy Project, argued that the apocalyptic warnings were premature. “Honeybee populations haven’t ‘crashed’ in the United States or elsewhere. Honeybees are not going ‘extinct.’ Crops are not ‘in trouble,’” he insisted.

Using U.S. Department of Agriculture (USDA) data, Entine posted a graph on the GLP website showing that honey-producing bee colonies in the U.S. are holding relatively steady at about 2.5 million colonies between 1995 and 2017. In fact, according to USDA figures, the U.S. honeybee population hit a 22-year high in 2016 before dipping slightly in 2017.

But the death knell reporting about CCD was so pervasive, it was often accepted without question that “the crucial pollinators could be edging towards extinction, plunging our entire food system into chaos,” Entine says. “The only problem is that it isn’t true.”

The University of Florida IFAS Extension sums up the current state of CCD: “Colony Collapse Disorder may not be a new disorder. In fact, many colonies have died over the past 50-60 years displaying symptoms similar to those of CCD. The disorder as described in older literature has been called spring dwindle disease, fall dwindle disease, autumn collapse, May disease and disappearing disease. We may never know if these historic occurrences share a common cause with modern-day CCD.”

Anything that jeopardizes insect success undermines our own, Engel reminds us noting that “An insect apocalypse is our apocalypse.” We need to heed his warning.

David E. Hubler is a veteran journalist and author. Prior to joining American Public University, he worked as an editor/writer for several news organizations including the Voice of America, United Press International and American Cities Business Journals. He received a bachelor’s degree in English from New York University and a master’s degree from the University of New Hampshire. His most recent book, “The Nats and the Grays, How Baseball in the Nation’s Capital Survived WWII and Changed the Game Forever” was published by Rowman & Littlefield Publishers.