These adorable creatures are becoming endangered.

It doesn’t look like a highly skilled killer, but that’s exactly what it is; the sand cat, which is the only felid found primarily in true desert. The sand cat (Felis margarita harrisoni) has a wide but apparently disjunct distribution through the deserts of northern Africa and southwest and central Asia. These gorgeous creatures are highly elusive and people rarely get to see them in the wild.

If you’d like to meet them, though, go out in the desert when the temperature is between 11 and 28 °C — that’s an ideal range for the sand cat. These felines also prefer a very dry, arid habitat with little vegetation, as well as flat or rolling terrains. If it gets too hot outside, the sand cat will retreat to burrows.

They’re extremely resilient, with thickly furred feet, and are adapted for both very high and very low temperatures. The long hairs growing between its toes create a cushion of fur over the foot pads which insulates from the very hot sand. They sometimes dig burrows in which they hide away from the extreme weather.

They don’t grow bigger than a house cat and their tails, which can be as long as half of the head-body length, features two or three rings and a black tip. 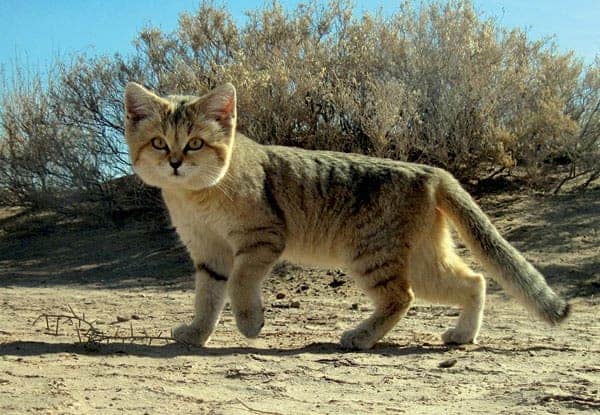 They can easily live in areas far away from water, and even though they drink water when they can, they get enough hydration just from their prey. This prey is usually small rodents, but occasionally the sand cat will hunt hares, birds, spiders, insects, and reptiles. And out here in the scorching desert, the sand cat is bound to face venomous snakes — luckily for the cat, it’s an expert snake-killer.

It might look like a house cat, but make no mistake — this feline is a versed hunter. Despite its cartoonishly cute eyes, when the sand cat spots a prey like a small mouse, it will instantly flatten itself, slink along the sand, and ultimately capture its prey in the blink of an eye

Habitat degradation is the major threat to the sand cat, which is listed as “near threatened” by the IUCN. Vulnerable arid ecosystems are being rapidly degraded by human settlement and activity, especially livestock grazing. They are very hard to breed in captivity and are vulnerable to a number of respiratory diseases.

To make matters worse, they’re easy to kill by humans, often for sport, because they freeze when pursued. Some animal behaviorists think this is because the cats think they can’t be seen against the sand.

Luckily for them, the cats are very elusive. They’re also very solitary by nature as they come together only for mating during the April season. The cats make all kinds of noises when they’re in heat. Just like your own kitty, the sand cat mews and purrs, but can also yelp like a chihuahua. Usually, a mom sand cat gives birth to two to five kittens.

In January 2010, the Al Ain Zoo announced the first-ever captive birth of two sand cat kittens following in vitro fertilisation and embryo transfer procedure, and in 2012, four sand cat kittens were born at the Ramat Gan Zoo as part of the European Endangered Species Programme.

The captive life, however, doesn’t suit them. As for keeping one as a pet — out of question! As with any wild cat, you should never have a sand cat for a pet, although that doesn’t stop many from capturing them to sell on the black market. Their natural instincts are far stronger than a house cat’s and can get bored very easily. If you thought a normal cat was curious, wait till you see the sand cat. Nevertheless, this is a majestic creature that ends up ill-treated when held as a pet by ignorant humans. The sand cat’s place is in the wild.