Activists in Brazil are endangered

Some 40 activists are killed every year in Brazil alone. The government is weak and corrupt, rarely capable of providing protection and enforcing its environmental laws. The big companies and local militias are powerful and ruthless.

by Dragos Mitrica
in Environment, News, Other
Reading Time: 4 mins read
A A
Share on FacebookShare on TwitterSubmit to Reddit 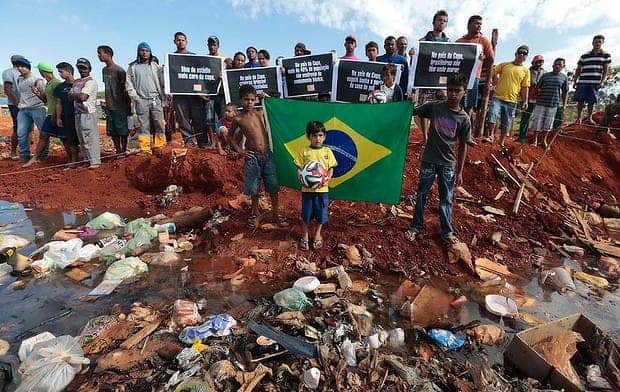 908 activists were officially assassinated in the world in the past decade, according to a new study. The real number is probably significantly higher than that one. But perhaps even more shocking is that about half of those people were killed in Brazil alone. So what makes Brazil so extremely dangerous?

Well, clues are plenty, but perhaps nowhere as plentiful as in Guarabana Bay. The bay, just a few minutes of driving away from Rio de Janeiro is covered with garbage and filth. Local fisherman Sandy Anderson de Souza kept an eye on the situation, and he reports the dire reality which big media seems to shy away from. He was out in the bay on his boat in 2001 when Brazil’s state-run oil giant Petrobas accidentally dumped 1.3 million tons of oil into the waterway.

“There was so much oil it looked like there was no water at all,” he said during a recent tour of the coastline. “A year later we noticed that many species of fish were disappearing and we started to catalogue this. There are 46 species of fish and shrimp that are no longer here.”

This incident wasn’t isolated; it was like nobody really care what they were doing to the environment in the bay – so he took it upon himself to campaign saving the bay.

“Think about it,” he said. “If you put one drop of oil in a glass of water you can’t drink it. Imagine what those millions of liters did to the bay.”

He and 13 other fishermen became activists. Not long after that, 4 of them were killed. No clues, no warnings, no explanation, no serious investigation, nothing. Anderson was shot himself, but he managed to live through the attack. Who would threaten a fisherman who has done nothing notable against anybody in his life, except protest against a big oil company? Who would have the means and the motivation to silence him – forever? Oh I don’t know, maybe the huge oil company he’s protesting against? It’s a wild guess, I know, but somehow, people who speak against Petrobras have a much higher chance of being assassinated than the average Joe. That’s what the Brazilian government thought as well, and they placed Anderson in a special “activist protection progam.”

For a few years, he’s been tucked away, living with his family in fear of his life. Truth be told, he’s among the lucky ones. Rafael Dias, a human rights worker in Rio believes there are few really safe places in Brazil.

“Brazil is a huge country,” Dias said, “and there are conflicts all over the place. There are not enough resources to safeguard human rights.”

Not even deep in the Amazon, there isn’t a safe place: a small indigenous tribe called the Xavante is also under threat- from soybeans. Their reserve is literally surrounded by huge plantations of it. Xavante activist Hiparidi Toptiro said that, like Anderson, he’s been shot, trying to stop big agro-business from encroaching on his territory.

“It’s dangerous to talk to the international media,” he said. “On the one hand, it helps to get the word out, but it’s also a quicker path to your own death.

Aside from these threats, there’s also the militia, which are extremely dangerous and often hunt down protestants and activists in Brazil.

“They are often police or ex-police,” Dias adds, “who use their public security training to go after activists.”

Brazil is, both officially and unofficially, the most dangerous country in the world to be an activist. No matter where you are, be it in the crowded, big cities, or in the tropical rainforests, you are not safe if you speak for a cause. Journalist Fernando Molica agrees, and he believes things won’t get any better any time soon. The legal system is weak and biased, and laws are often hard to apply in such a vast territory (vast and full of resources). Not even the government offers much protection – as a matter of fact, the government are quite biased in their own way when it comes to activists.

“I feel like at any minute I could open the door and be killed,” he said. “I know why the government recently took my guard away. We activists have stopped some new government oil projects here on the bay. Government projects.”