by Tibi Puiu
in Tech
Reading Time: 1 min read
A A
Share on FacebookShare on TwitterSubmit to Reddit 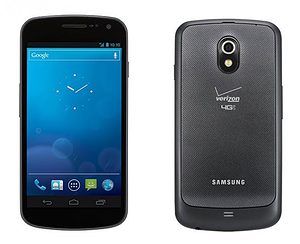 Samsung‘s really tapping into the ultra smartphone market lately, which has seen a slew of releases lately. In its top-tier sector, Samsung released the Galaxy S II just a few months ago, in close competition with the 4Gs from Apple. And just recently, Samsung has delivered the dream phone us geeks all of over world have been drooling after for so long – the Samsung Galaxy Nexus.

The mobile is official out today on Verizon, which is just perfect for the Nexus, catering to its needs with mega powerful 4G LTE network. The Galaxy Nexus is the first with Android 4.0, called “Ice Cream Sandwich,” 32 GB of un-replaceable storage, all sized at 4.65-inches, which is just insanity.

The phone is out starting today, Thursday 15 Dec., in all Verizon shops at $300.