While Samsung is busy planning the much anticipated release of  its Galaxy S II GT-I9100 handset, it seems there’s a new high end device from the mobile manufacturer that will sooner or later try to break the ball on its competitors with the up-till now secret Galaxy S2 Mini. Tech-blog pundit Engadget was the first to break the news when it leaked an official document from British carrier 3 UK containing a spreadsheet with various details concerning the phone, including a grainy photo of the S2 Mini and even recommended above the line advertising budget. 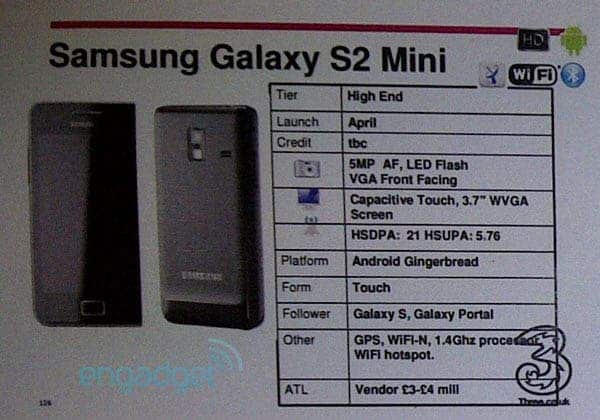 The S2 Mini is considered to be a high end handset that has a 3.7-inch WVGA screen, a 5-megapixel camera, a front facing webcam, LED flash, Android Gingerbread, a 1.4GHz processor (faster than the 1.2GHz model on the Samsung Galaxy S II), and HD video recording capabilities.Furthermore, the Galaxy S II Mini will be supporting 3G Networks with HSPA+ connectivity support. Other features include GPS for location based services, WiFi (802.11n support) and mobile hotspot capability.

It’s already hardware-wise superior to the Apple iPhone 4, let alone to its Galaxy Ace (basically Galaxy S Mini) GT-S5830 predecessor, so we’re very much looking forward for the release of this Samsung handset. No details regarding price rage, but we do know it’s going live sometime in April.