by Tibi Puiu
in Tech
A A

At the recent Computex technology exhibit in Taipei, MSI has unveiled some of its latest technological advances in the field. Among the various devices the company has exhibit at the trade show, was the WindPad 100W which has caused stirs all over the tech world due to its seemingly powerful specs, and two other tablet models which are looking equally as impressive: the WindPad Enjoy 10 and, respectively, the WindPad Enjoy 7.

MSI, has never been a major player in the tablet market, but these latest two models seem to take the cake. Running on Gingerbread flavor rather than the tablet-specific Honeycomb version, due to stability and app compatibility related considerations officials report, this tablet can be considered a beast. Despite this, neither tablet will be licensed to access the Android Market, although MSI did tell Engadget it is planning “a workaround to let you obtain apps.”

Enjoy 10 boosts a 10in display with a capacitive multi-touch display, working at a resolution of 1024 x 768. Inside is an ARM Cortex A8 1.2GHz (single-core) processor, 4GB of storage, 512MB of RAM and a 27.3WHr battery. The tablet is said to support playback for 1080p video and the 2-megapixel camera can record 720p video. The smaller Enjoy 7 tablet has similar specs with a smaller 7in display with a resolution of 800 x 480 and a smaller 17.3WHr battery. The Enjoy WindPads are set to launch in the US in July, followed soon after by a European launch. 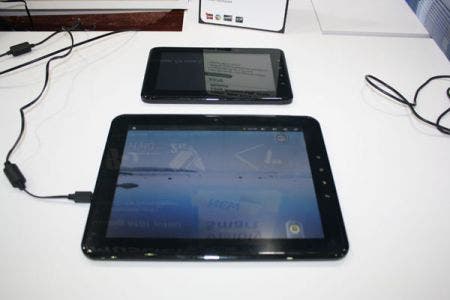 Both models have been on display with earlier versions, with full production starting this July and slate shipping starting as of this month. MSI promisses that the WindPad Enjoy 10 will be priced at under $300, while the smaller Enjoy 7 will be even cheaper. Valid competition for the iPad? At that price and those specs, yes, it might be; if they can keep up with their marketing too, of course.