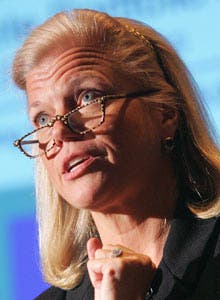 The veteran of technology, who is 54 takes on the corporation starting January 1, 2012, after being in charge of sales and marketing for a few years. Former CEO will still remain as chairman .

After she takes over IBM, women will be in charge of two of the world’s largest technology companies, after last month Meg Whitman was named CEO of Hewlett-Packard. But while Whitman turned to a company in disarray with numerous and serious problems to face, Rometty will inherit a finely tuned IBM whose focus on the high-margin businesses of technology services and software has helped it thrive.

“It is a good sign,” Jean Bozman, an analyst with IDC. “It does create an environment in which more of these high-ranking women executives can see that’s within reach. The more that happens, the more normal that will be. I think this might be a great sign that we’ve turned a corner. Certainly the Baby Boomers have wanted this for a long time.”