How IP cameras work: the basics of modern surveillance

In an ever more crowded and complex world, people are more aware of the need for security, both in business settings and at home.  The need for alarm systems, limited access, extra locks, and passwords are all common these days.  Surveillance via a system of digital cameras is also gaining popularity, and such systems can be surprisingly affordable for those on a tight budget.  Such surveillance commonly uses internet protocol cameras, also known as IP cameras, to effectively monitor important locations in a home or office.   While it is standard in many commercial and industrial settings, these cameras can easily be used for home surveillance too.

A Digital Generation of Cameras

Cutting edge digital surveillance cameras have surpassed the old model of closed circuit television, seen frequently in the corner of the room in minimarts and banks.  These new digital cameras use a computer network to both send and receive information.  In this new system, the network manager does not need to be in one place, as these cameras can be accessed over the internet.  If a building has wi-fi capability, then the system can be accessed anywhere.  This can help efficiency.  For example, it allows security team officers to patrol the second floor of a store and still access a live feed of the first floor.  The cameras are smaller, and the visual resolution is better too.   They even offer HD capability. 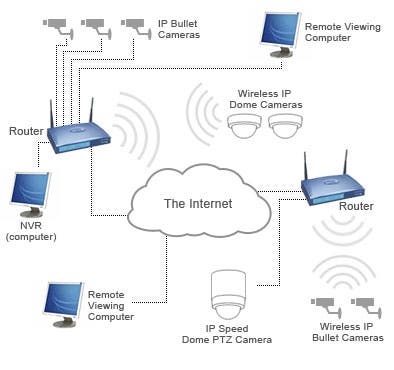 New digital surveillance cameras function like webcams, but they can do more, too.  For instance, they can be controlled remotely and repositioned for different usage.  This might come into play with different uses of a space.  For example, if a politician is giving a speech in the lobby of a hotel, the camera could be pointed at a podium rather than on the entry doors.  Another great feature is offered on cameras set up to respond to movement, sound, or heat.  When nothing is going on, there is no wasted recording, but as soon as there is action, the camera goes live.  If there is a questionable incident, this makes it much easier to locate the desired footage.  This saves time and thus money.   These cameras can also be used to safely communicate over distance, as when a gas station attendant in a security cage safely communicates with a customer having a problem at the pump.

IP cameras can be used at home for personal use, whether it’s monitoring the liquor cabinet or the front porch.  Their uses are nearly endless.  Since some cameras are only a few inches long, they are easy to place in many spots:  on a shelf, beside a computer, on a counter, or even a windowsill.  The latter may be especially appropriate if there has been a rash of thefts in the area.  Parents with young children need to get out on the town once in a while, and they will often hire a nanny or babysitter.  That’s a perfect time to use a small camera for home surveillance.  If anything goes wrong, the parents can watch the footage and quickly get to the root of the problem.  When a teenage girl starts dating a boy the family doesn’t know, her parents may have some concerns.  While they may not want to embarrass either teenager with their presence, they may want to have a hidden camera in the living room or a bedroom– just in case.